1953 Was a Good Year for Leaving Home 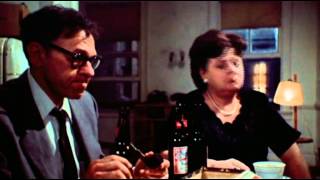 A hilarious and poignant period piece, NEXT STOP, GREENWICH VILLAGE is a semiautobiographical account of director Paul Mazursky's move to Greenwich Village in 1953 to become an actor. Larry Lipinsky (Lenny Baker), a Brooklyn boy with dreams of stardom, moves to the Village, much to the chagrin of his extremely overprotective mother (Shelley Winters). Larry ends up hanging out with an eccentric bunch of characters while waiting for his big break. His group of tight-knit friends includes a wacky girl named Connie (Dori Brenner); Anita (Lois Smith), an emotionally distraught young woman who constantly contemplates suicide; Robert (Christopher Walken), a Waspish young poet; and Bernstein (Antonio Fargas), a black gay man. This band of outsiders becomes Larry's new family as he struggles as an actor and works toward a break in Hollywood. Mazursky's affection for this period is apparent in this underrated classic's magical atmosphere, which evokes the youthful view of a particular time and place that is rarely seen in films. The performances, featuring a host of young stars (including an early film appearance by Walken), are also first-rate, especially Winters's turn as Larry's tap-dancing mother.

New York in the Fifties
$19
Add to Cart

53%off
Oprah Winfrey Presents Mitch Albom's For One More Day (DVD)
$6.99 on Sale
Add to Cart