90K ratings
Currently Out of Stock: We'll get more as soon as possible
Notify Me When Available
Add to Wishlist
Format:  Blu-ray
item number:  64AJG
91% recommend us! 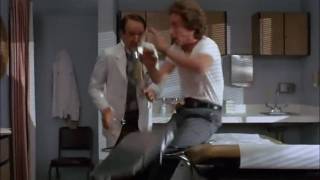 Dennis Quaid stars as Lieutenant Tuck Pendleton, a hell-raising Navy test pilot, in this fantasy-suspense comedy that harkens back to 1966's FANTASTIC VOYAGE. Tuck Pendleton volunteers to be miniaturized in a scientific experiment and fly a capsule injected into a rabbit's bloodstream for top-secret medical research. But after he has been shrunk, some unscrupulous scientists, desirous of selling the miniaturizing process on the black market, break into the lab. In the ensuing chase, Tuck is accidentally injected into the body of unsuspecting grocery clerk Jack Putter (Martin Short). Meanwhile, the villains are in hot pursuit of timid Jack in order to get hold of a missing computer chip that was miniaturized along with Tuck, while Tuck must figure out a way to expel himself from Jack's body and get back to his normal size. Mayhem ensues as Jack, a nervous hypochondriac, is forced to recognize the strange presence in his head and bravely join forces with Tuck and his estranged girlfriend (Meg Ryan) to outsmart and outchase the high-tech thieves. Featuring stunning special effects and visuals from inside the human body as well as a genius and madcap performance from Martin Short at his acrobatic and wild best.