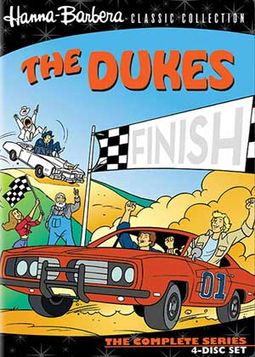 In this fondly remembered animated series produced by Hanna-Barbera Studios, Bo, Luke and Daisy Duke take their high-wheelin' country cruisin' around the world in a race against Boss Hogg for the family farm. No joshin' - the Dukes speed through France, Italy, Austria, Greece, England - you name it, the General Lee made tracks there! En route, Boss Hogg pulls the nastiest tricks ever, like blinding the boys with a fog machine, having them kidnapped and tricking them into a jewel heist. Why, that Hogg's as crooked as a dog's hind leg! But that won't stop the Dukes from fighting a fair fight and teaching that cheat a few tricks along the way. Y'all need to catch this 4-Disc, 20-Episode Complete Animated Series Collection from the time the pedal hits the metal all the way to the finish line!

This rip roaring release includes the entire cartoon series THE DUKES, an animated version of the popular live action series THE DUKES OF HAZZARD, following a couple of hell-raising brothers throughout many antics in the Southern bastion of Hazzard Country.

19%off
The Dukes of Hazzard: The Beginning
$12.10 Super Savings
Add to Cart