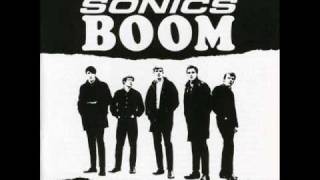 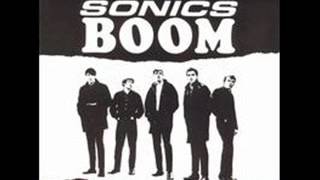 The Sonics: Larry Parypa, Andy Parypa, Gerry Rosalie, Bob Bennett, Rob Lind.
Recorded in 1965. Originally released on Etiquette. Includes liner notes by Miriam Linna.
Digitally remastered by Bob Irwin.
Recording information: Wiley/Griffith Studios.
Photographer: Jini Dellaccio.
While it might not be the mainline shot of rock & roll that was their debut, the Sonic's second studio full-length, released in 1966, is a stellar album in its own right. BOOM, which alludes to both the band's regional origins and the inspiration for their name (the Pacific Northwest being a fabled testing ground for Boeing jets), contains raw garage-rock originals such as "Cinderella" and "The Hustler"; punked up versions of "Jenny Jenny Jenny" and "Don't You Just Know It"; and a howling, scorched-earth take on the definitive anthem for rock-&-roll delinquency "Louie Louie." The Sonics embodied everything rock & roll was and is still about: taking the most primal and carefree aspects of being alive and providing them with a musical avatar. Three chords never sounded so truthful. The 1999 Norton Records reissue contains three bonus tracks.