Doctor Who The Movie PG-13 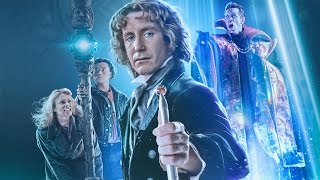 Doctor Who: The Movie Blu-Ray Trailer | Doctor Who

Paul McGann and Sylvester McCoy star as the Time Lord in this made-for-TV feature based on the long-running BBC sci-fi series. Whilst returning the Master (Eric Roberts)'s remains to their home planet of Gallifrey, the Doctor (McCoy) crash lands the TARDIS on Earth in San Francisco in the year 1999. Gunned down by a street gang, the Doctor is rushed to hospital, where exploratory surgery by Dr Grace Holloway (Daphne Ashbrook) triggers a regeneration into the Eighth Doctor (McGann). Meanwhile, the Master has taken over the body of a paramedic and infiltrated the TARDIS, which he plans to use in his latest scheme to take over the Doctor's new body and destroy the world.