848 ratings
Currently Out of Stock: We'll get more as soon as possible
Notify Me When Available
Add to Wishlist
Format:  DVD-R
sku:  39SAQ
Related products:
The Outlaw for $5.95
The Good Guys and the Bad Guys for $14.39
92% recommend us! 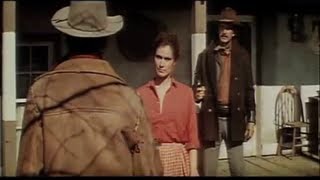 Dean Martin and Rock Hudson star as long-time friends who find themselves on opposite sides of the law in the thrilling, action-packed Western adventure Showdown. Billy Massey (Martin) and Chuck Garvis (Hudson) have been buddies since childhood, but when Chuck got married, Billy took his cue and left the newlyweds on their own. Chucks star shone bright as he distinguished himself as the towns hard-working, honest sheriff, while Billy drifted into a life of crime. The two friends paths cross, however, when Billy robs a train and it is Chuck who must hunt and arrest him. So begins a classic confrontation in the Old West, as Chuck is determined to catch and possibly help his old pal, and Billy is just as determined not to get caught...no matter the price.

Friends | Outlaws | Theatrical Release | Universal Vault Series
This product is made-on-demand by the manufacturer using DVD-R recordable media. Almost all DVD players can play DVD-Rs (except for some older models made before 2000) - please consult your owner's manual for formats compatible with your player. These DVD-Rs may not play on all computers or DVD player/recorders. To address this, the manufacturer recommends viewing this product on a DVD player that does not have recording capability.