A double feature that'll tear you in two! 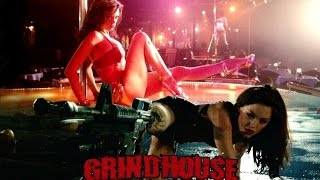 GRINDHOUSE is the cinematic equivalent of Bach and Beethoven adding their touch to a boy-band song. Master directors Quentin Tarantino (PULP FICTION) and Robert Rodriguez (SIN CITY) indulge their inner fanboys and team up for this homage to their favorite B-movies. Rodriguez's film, PLANET TERROR, is an old-fashioned zombie film that's infused with enough gore and giggles to please even Peter Jackson (BAD TASTE). Rose McGowan (CHARMED) plays Cherry, a go-go dancer whose night is interrupted by a vicious zombie attack that leaves her missing a leg. Her ex-boyfriend, Wray (Freddy Rodriguez, SIX FEET UNDER), takes charge, fashioning her a new leg from a machine gun and killing zombies along the way. In Tarantino's DEATH PROOF, Stuntman Mike (Kurt Russell) stalks beautiful women with his deadly vintage car. When he picks a trio of tough girls (Rosario Dawson, Tracie Thoms, and Zoe Bell), he learns they aren't such easy prey.

This double feature plays as a three-hour ode to the horror and exploitation films that once played in grimy grindhouses across the country. As with any Tarantino film, there are plenty of nods to pop culture, and this is no exception. Fellow horror directors Rob Zombie, Eli Roth, and Edgar Wright contribute fake trailers that are squeezed in between the two features. Genre fans will love seeing familiar faces such as Tom Savini, Danny Trejo, and Bill Moseley. Clearly Tarantino and Rodriguez were film lovers before they were filmmakers, and their passion for the medium is infectious. Those who can stomach GRINDHOUSE's high level of guns, guts, and gore are in for a treat. The hyper-violent films aren't for everyone, but three hours of film has rarely been this much fun.