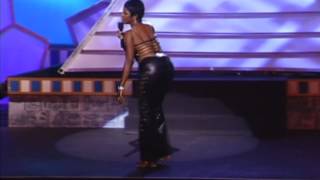 The Queens of Comedy - Trailer

"Tonight we're making history. This's the first time four women has been onstage at one time making a movie."
"QUEENS OF COMEDY is better than KINGS OF COMEDY anyday."
- satisfied audience member at the end of the performance

Following in the footsteps of Spike Lee's THE ORIGINAL KINGS OF COMEDY--or, more precisely, trying to outdo that film--THE QUEENS OF COMEDY stars four African American female comedians taking on life, love, and their own personal pursuits of happiness. Miss Laura Hayes, Adele Givens, Sommore, and Mo'Nique are at their raunchiest best as they perform their stand-up routines at the Orpheum Theater in Memphis, Tennessee. The girls prove that they can be just as funny--and just as filthy--as the boys in this hysterical night of comedy. In addition to the stage show, the film includes documentary footage of the four women walking through the streets of Memphis, meeting the people, "working" at Interstate Bar-B-Q, and asking for fake fingernails for their toes. They kid each other, curse at each other, and clearly have a lot of fun together. Their camaraderie is infectious and hilarious, and their attacks on the state of the male-female war of the sexes is fresh and exhilarating. THE QUEENS OF COMEDY proves that when it comes down to it, women can certainly give it just as good as men can.