Dawes All Your Favorite Bands [Digipak]

Rolling Stone: 3.5 stars out of 5 -- "[T]hey inject a brooding guitar jam and some of Goldsmith's most sweet-and-sour lyrics. Rock's thoughtful past has rarely sounded more vibrant." 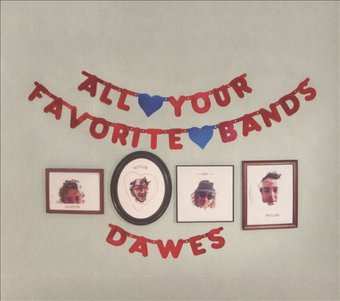 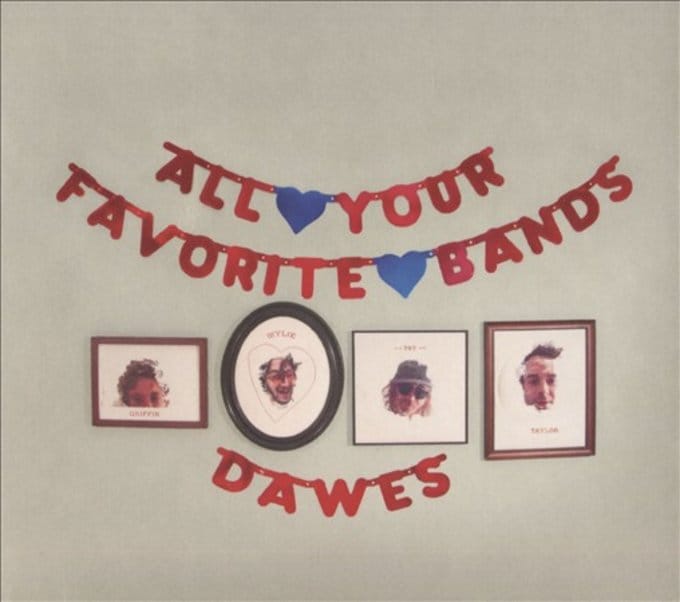 Get email alerts for Dawes
62 ratings
Out of Print: Future availability is unknown
Notify Me When Available
Add to Wishlist
Format:  CD
item number:  63WR9
91% recommend us!

Rolling Stone
3.5 stars out of 5 -- "[T]hey inject a brooding guitar jam and some of Goldsmith's most sweet-and-sour lyrics. Rock's thoughtful past has rarely sounded more vibrant."
Paste (magazine) - "Peppered with bursts of self-doubt, bitterness, frustration and happiness, there's a powerful emotional duality laid out throughout ALL YOUR FAVORITE BANDS that wonderfully encapsulates the emotional rollercoaster of a break-up."

Personnel: Taylor Goldsmith (vocals, guitar); Tay Strathairn (keyboards, background vocals); Wylie Gelber (bass guitar); Griffin Goldsmith (drums, percussion, background vocals).
Recording information: Woodland Sound Studios, Nashville, TN.
Photographer: Kevin Hayes .
At the start of Dawes' fourth studio effort, 2015's All Your Favorite Bands, lead singer Taylor Goldsmith kicks off the sanguine opener "Things Happen" by admitting "I could go on talking, or I could stop/Wring out each memory til I get every drop." This sentiment, ripe with a post-breakup emotional stew of yearning, anger, and eventual acceptance, colors all the tracks on this tight, impeccably crafted album. Influenced by the passionate '70s country-rock and singer/songwriter sound of artists like Jackson Browne and groups like the Band, Los Angeles' Dawes have quietly built a loyal following with their own brand of memorable and often poignant folk-rock. Produced by journeyman composer and guitarist David Rawlings (Emmylou Harris, Gillian Welch, the Decemberists) at Nashville's Woodland Studios, All Your Favorite Bands has a warm, organic texture that's at once raw and immediate, sophisticated and polished. It's perhaps the closest Dawes has come to capturing their live sound. Each song is performed with an intimate, personal intensity, making it feel like they're playing it only for you. Cuts like the urgent, minor-key "I Can't Think About It Now," with its gospel-style female backing vocals, and the heartbreakingly honest "Waiting for Your Call" are rootsy anthems that combine Goldsmith's poetic, literate lyrics, crisp vocal harmonies, and evocative, Dire Straits-influenced guitars with the hushed ripple of a Hammond organ. These songs, while efficiently constructed, have plenty of breathing room -- there are actual guitar solos here, and jazz-like drum accents. Of course, a big part of what makes Dawes' songs so palpable is Goldsmith's knack for highlighting those often mundane details in life that initially seem insignificant, but take on greater meaning in hindsight. On the title track he sings "When I think of you, you've still got on that hat that says 'Let's Party'/I hope that thing is never thrown away," and later, "I hope your brother's El Camino runs forever." Although most likely directed at a former flame, with the song's insistent, piano-driven vibe it sometimes feels more like a message of goodwill toward the band's own fans. Similarly, on the ruminative breakup number "Don't Send Me Away," Goldsmith transforms his car into a mausoleum of regret with the line "I'm getting on the freeway/Your jacket's in my car/Your ashes in my ashtray/And I'm there with you, wherever you are." It's this gift for capturing intangible longing that drives much of All Your Favorite Bands. Goldsmith perhaps expresses this the best on the tragic ballad "To Be Completely Honest." He sings "I think I know how it ends/The universe continues expanding while we discuss particulars of just being friends/And maybe that makes everything okay/Your memory the defect at the heart of every promise." Ultimately, All Your Favorite Bands is a comforting album, leaving you with the notion that whatever happens in your life, good, bad, or indifferent, all things take on a beautiful if bittersweet meaning when viewed through the rear-view mirror. ~ Matt Collar

Jason Isbell
Something More Than Free [Slipcase]
$15.40
Add to Cart