Eagles One of These Nights

Q (Magazine): "The Eagles' fourth album maneuvered the group away from their folk roots....ONE OF THESE NIGHTS was the Eagles' best yet." 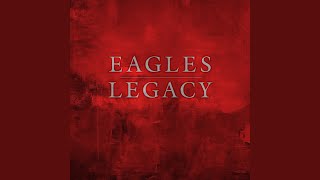 Q (Magazine) - p.110
"The Eagles' fourth album maneuvered the group away from their folk roots....ONE OF THESE NIGHTS was the Eagles' best yet."

The Eagles: Bernie Leadon (vocals, electric & steel guitars, banjo, mandolin); Don Felder (vocals, electric & slide guitars); Glenn Frey (vocals, guitar, keyboards); Randy Meisner (vocals, bass); Don Henley (vocals, drums, percussion).
Recorded at Mac Emmerman's Criteria Studios, Miami, Florida.
Asian version features an LP-style slipcase.
CD comes in Jpn LP Sleeve.
This marked the transition from a nifty country rock band to a rock combo with the potential for world domination. The music was a tad sweeter and less ironic, a morsel rockier with Top 40 friendliness. Tracks such as 'Take It To The Limit' and 'Lyin' Eyes' have been played far too much on the radio. They need to be rested in place of Bernie Leadon's unusual instrumental, 'Journey Of The Sorcerer' (used as the theme to BBC Television's Hitchhiker's Guide To The Galaxy), or the other great Leadon song, 'I Wish You Peace'. Financially, the Eagles never looked back after this, but the critical snipers were out in force.

Titanic In Print And On Screen - An Annotated Guide To... (Paperback Book)
$35.95 on Sale
Add to Cart