A dose of World War II realism puts a gritty edge on this retelling of the early talkie "Outward Bound" that loses none of the prior version's ethereal power. 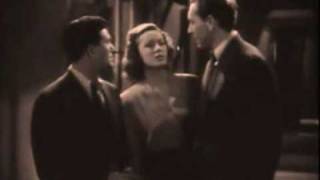 Nazi bombs rain fire into an English port town. The smoke clears and a disparate group of human beings caught in the blast finds itself aboard a luxury liner headed... who knows where. They soon learn their one-way tickets are stamped Heaven. And Hell. A dose of World War II realism puts a gritty edge on this retelling of the early talkie Outward Bound (starring Leslie Howard) that loses none of the prior version's ethereal power. A stellar cast - John Garfield, Paul Henried, Sydney Greenstreet, Eleanor Parker, Edmund Gwenn and more names evocative of a remarkable filmmaking era - bring their considerable talents to a tale of passengers who discover their true natures as they discover their destinations.

In this remake of OUTWARD BOUND, which updated the story to include topical refences to the war still raging in Europe, Henry (Paul Henreid) and Ann (Eleanor Parker) are a couple from Austria hoping to escape Nazi bombings. They are en route to a ship leaving Europe when an explosion throws them from their car and leaves many passersby dead. Despondent and unable to meet the ship, the couple return to their apartment and decide to commit suicide by turning on the gas. They awake to find themselves on a ship shrouded in fog and carrying many passengers, among them Tom Prior (John Garfield), a wisecracking reporter who was also a witness to the earlier bombing. Henry and Ann discover that the ship is actually Limbo, a waiting station between Heaven and Hell, where Mr. Thompson (Sydney Greenstreet) will determine their final destination for eternity.

Afterlife | Fantasy | Death | Teenage | Nazis | Violence | Teenagers | Sailing | Couples | Boats
This product is made-on-demand by the manufacturer using DVD-R recordable media. Almost all DVD players can play DVD-Rs (except for some older models made before 2000) - please consult your owner's manual for formats compatible with your player. These DVD-Rs may not play on all computers or DVD player/recorders. To address this, the manufacturer recommends viewing this product on a DVD player that does not have recording capability.

25%off
Wives Under Suspicion
$5.95 Spring Sale
Add to Cart

Customer Rating:
Based on 2019 ratings.


If you believe some of the best films are black and white, don't miss "Between Two Worlds"! This fine, rare classic stars Sydney Greenstreet and Paul Henreid, seen in "Casablanca", with Edmund Gwenn from "Miracle on 34th Street" and the tough John Garfield. It's a dark story of a freighter crossing the Atlantic with passengers, most of whom are unaware that they are dead. The ship is to be met by a boat carrying an "examiner" who will tell each passenger where they are to spend eternity. Gwenn, Garfield and Greenstreet are brilliant, with a terrific supporting cast. There are a couple of real surprises in the plot. The only downer in the picture is the sappy, melodramatic romance between Henreid and the one-star actress Eleanor Parker, which gives a poor introduction and finish to an otherwise good film. In their defense, the lines they were given would have sounded stupid with any actors. In any case, definitely worth seeing, more than once!