The intertwined lives of the three musical legends form "Song of Love,"a sumptuously produced and skillfully played biopic set to 11 musical pieces that include Schumann's "Arabeske," Brahms' "Lullaby" and the "Mephisto Waltz" of Franz Liszt. 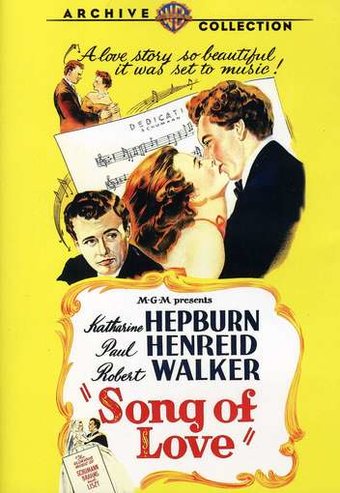 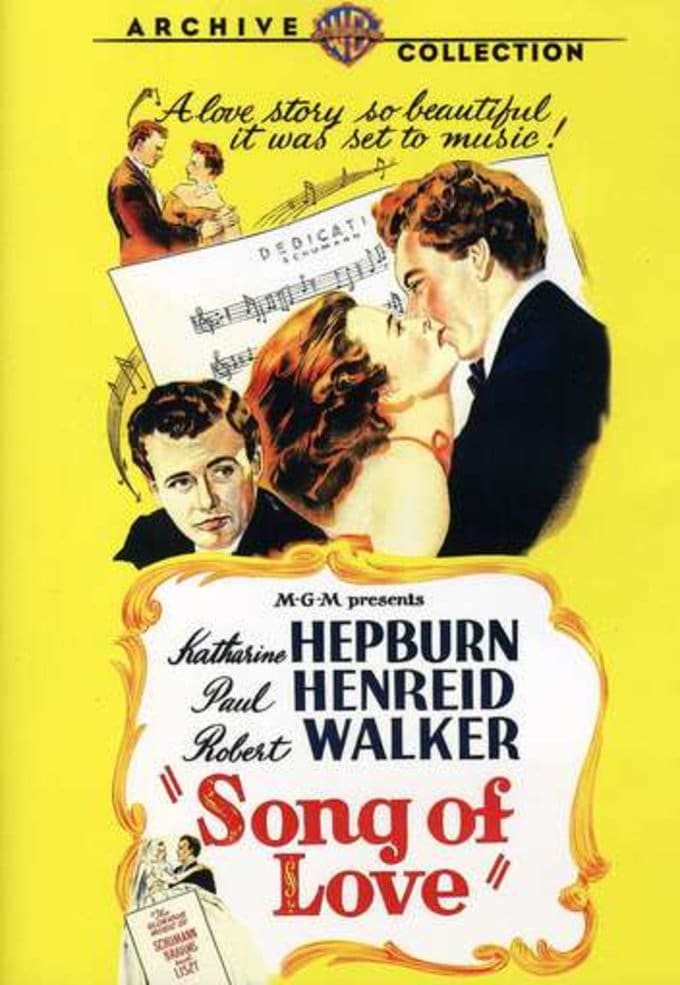 The music, composed long ago, still speaks to us. It reaches out to tell us of profound struggles and great genius, of aching setbacks and glorious triumphs, of three people whose names, like their music, echo across the years: Clara Wieck, Robert Schumann and Johannes Brahms. The intertwined lives of the three musical legends form "Song of Love," a sumptuously produced and skillfully played biopic set to 11 musical pieces that include Schumann's poignant "Arabeske," Brahms' tender "Lullaby" and the "Mephisto Waltz" of Franz Liszt. Katharine Hepburn portrays renowned pianist Wieck, married to troubled Schumann (Paul Henreid) yet romantically admired by Brahms (Robert Walker). And virtuoso pianist Artur Rubenstein ghosts the recorded pieces that the stars, in a deft display of acting prowess, seem to play on screen. Bravo to all!

Katharine Hepburn portrays the concert pianist Clara Wieck Schumann, wife of composer Robert Schumann (Paul Heinreid), in this solid historical melodrama. A devoted wife and mother, Clara gives up her own promising career to marry the brilliant but unsuccessful composer and raise their seven children. As Robert struggles to support their family, a young, brilliant student of his, Johannes Brahms (Robert Walker), becomes smitten with Clara. But as Brahms rises to glory as a composer, his teacher sinks into madness. Robert Schumann's downfall and eventual incarceration lead to Clara's own unwavering devotion to her husband's legacy; she is determined to popularize his gifted compositions by playing them herself. (Hepburn's piano playing in the film was actually done by Artur Rubinstein.) Similar in tone to Columbia Pictures' Song Series, which includes 1945's A SONG TO REMEMBER, a biopic of Chopin; and 1960's SONG WITHOUT END, the story of composer Franz Liszt, this historical biography captures the genius of the now well known composer and his staunch supporter. The film is filled with captivating music from Brahms, Liszt, and Schumann.

Composers Robert Schumann and Johannes Brahms and the woman they both loved are the subject of this historical melodrama that features the wonderful music of Franz Liszt, Brahms, and Schumann.

Concert
This product is made-on-demand by the manufacturer using DVD-R recordable media. Almost all DVD players can play DVD-Rs (except for some older models made before 2000) - please consult your owner's manual for formats compatible with your player. These DVD-Rs may not play on all computers or DVD player/recorders. To address this, the manufacturer recommends viewing this product on a DVD player that does not have recording capability.

Our Town (The Film Detective Restored Version)
$10
Add to Cart

Rachel and the Stranger (Blu-ray)
$20
Add to Cart