Get email alerts for People Under The Stairs
Currently Out of Stock: We'll get more as soon as possible
Notify Me When Available
Add to Wishlist
Format:  Vinyl LP  (2 Records)
item number:  PL 70251
91% recommend us! 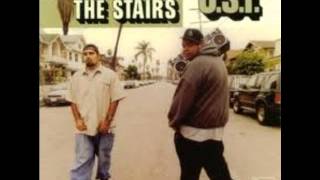 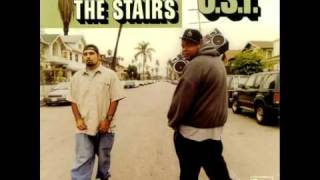 People Under The Stairs: Double K, Thes One.
Additional personnel includes: Camel MC (rap vocals); Headnoidic (electric bass).
Includes liner notes by Thes One.
It's hard not to appreciate what People Under the Stairs are trying to accomplish with their third full-length. Fortunately, the attempt (i.e., the finished product) works just as well in practice as in theory. Although there could be a little more variety from track to track, this is one fun and funky record. There's a democratic, stylistic purity to O.S.T. -- hence the title -- that is wholly consistent with its predecessors. As Thes One explains in the liner notes, it's "an album that is made up of old records and personal experiences" -- no more, no less. Both One and Double K serve as MCs and DJs and think of themselves more as B-boys than artists or musicians. They eschew live instrumentation (with the exception of the bass on "The Breakdown") and rely instead on their distinctive, loose-limbed raps; deep, diverse record collections; and mad turntable skills. Consequently, the Los Angeles duo has been compared more often to the underground hip-hop combos of the 1980s and 1990s, like the Pharcyde and Freestyle Fellowship, than to their contemporaries of the 2000s. The best example of their no-frills approach comes to fruition on the horn-blasted party anthem "Hang Loose," a cross between Grandmaster Flash & the Furious Five and Poor Righteous Teachers (and in which they compare themselves to Kool & the Gang). Laid-back grooves and shout-outs to 1970s TV shows (like Scooby Doo), cold beverages (Long Island iced teas), and tasty treats (fish and chips) make O.S.T. one of the more enjoyable hip-hop releases of 2002. ~ Kathleen C. Fennessy