Eleven Men and a Girl

Joe E. Brown swaps horsehide for pigskin and - surrounded by the 1929 All-American football team, who make the lithe Brown look like a greyhound at a Rottweiler convention - scores big laughs. 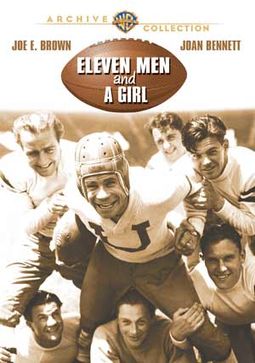 In Elmer the Great and two more baseball-themed hits, fan and former semi-pro player Joe E. Brown wound up and pitched winning comedy. In Eleven Men and a Girl, he swaps horsehide for pigskin and - surrounded by the 1929 All-American football team, who make the lithe Brown look like a greyhound at a Rottweiler convention - scores more big laughs. Directed with plenty of gridiron action by William A. Wellman (Wings), the story concerns a college with a losing team, until the college president's daughter whips off her glasses and va-va-vooms 11 football heroes into choosing a new alma mater. Joan Bennett plays the daughter and a pre-Code scene with her garbed in a soaking-wet, see-through frock proves it was more than going from four eyes to two that captured the athletes' attention.

MAYBE IT'S LOVE is one of the many college football musicals which bred like minks in the early talkie era. A very young Joan Bennett tops the cast as Nan Sheffield, the daughter of a college president (George Irving). The nominal leading man is Tommy Nelson (James Hall), the black-sheep son of a wealthy alumnus (Anders Randolph). Though Nelson is an ace football player, President Sheffield refuses to enroll the boy because of his bad reputation, whereupon Tommy's father withdraws his financial backing and bars his son from ever setting foot on Sheffield's campus. Falling in love with Nan, Tommy signs up with the college under an assumed name, giving up his wastrel ways to lead the football team to victory. Joe E. Brown steals the show as Speed Hanson, a goofy gridiron star who emits a loud and long yell whenever scoring a touchdown (this was, in fact, the first film in which Brown's famous "Yeeeeowww" was heard -- but certainly not the last). The remaining footballers are played by the members of the real-life 1929 All-American team. Incidentally, screenwriter "Mark Canfield" was actually a pseudonymous Darryl F. Zanuck. To avoid confusion with a later, unrelated film of the same title, MAYBE IT'S LOVE was rechristened ELEVEN MEN AND A GIRL for television showings.

Football Players
This product is made-on-demand by the manufacturer using DVD-R recordable media. Almost all DVD players can play DVD-Rs (except for some older models made before 2000) - please consult your owner's manual for formats compatible with your player. These DVD-Rs may not play on all computers or DVD player/recorders. To address this, the manufacturer recommends viewing this product on a DVD player that does not have recording capability.