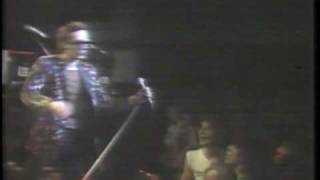 A reading of the track listing to Extended Versions will look rather familiar to a loyal Graham Parker fan, and with good reason -- the same ten songs appeared in the very same order on Parker's 1979 masterpiece Squeezing out Sparks. So has someone at BMG repackaged Squeezing out Sparks for some reason? Well, no, not quite. After Squeezing out Sparks was released to rave reviews and Parker and his band the Rumour were getting lots of press for their firestorm live shows, the promotional department at his label, Arista, took recordings of two Parker concerts (taped by radio stations for later broadcast), pulled out all the tunes from Squeezing out Sparks, sequenced them in the same order as the studio album, tacked on two extra songs for good measure (Parker's acerbic kiss-off to his old label, "Mercury Poisoning," and a corking cover of the Jackson 5's "I Want You Back"), and released a limited pressing of the results to press and radio only under the title Live Sparks. Twenty-six years later, some bright young thing at BMG has pulled Live Sparks off the shelf, clipped off the two songs that didn't appear on Squeezing out Sparks, and shipped it out with cut-rate artwork and minimal liner notes as Extended Versions. The reasoning behind this release is utterly baffling, but for Graham Parker fans, this budget-priced disc is buried treasure. While the original Squeezing out Sparks is a more satisfying listen, these performances capture the Rumour at the height of their considerable powers, sounding fierce and energetic at every turn, and these are ten of Parker's very best songs, which he sings with the force and gravity they deserve. Someone at BMG should be thanked for finally giving these performances the stand-alone commercial release they deserve, and then sent to bed without dinner for not letting anyone know what they've done. ~ Mark Deming

30%off
Graham Parker
From the Front Row Live
$6.98 on Sale
Add to Cart

68%off
Graham Parker
Burning Questions
$7.98 on Sale
Add to Cart

68%off
Graham Parker
Struck By Lightning
$7.98 on Sale
Add to Cart