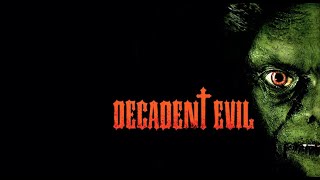 It's a twisted tale about a fallen foot tall Homunculus named Marvin (part human/part reptile) who is imprisoned in a birdcage by a vengeful lover who is bidding to become the world's most powerful vampire.

B-movie maestro Charles Band directs another entry in his cannon of campy, low-budget horror films with the made-for-video feature DECADENT EVIL. The bloodletting action centers around a sleazy strip club called the Meat Market, where sexy female vampire, Morella (Debra Mayer), has transformed her former lover, Marvin, into a half-man/half-reptile creature whom she keeps suspended in a birdcage. Together with her vampire-stripper cohorts, Sugar (Jill Michelle) and Spyce (Raelyn Hennessee), Morella lures unsuspecting men to their deaths in a vile plan for world domination that is soon threatened by the arrival of Marvin's midget son, Ivan (Phil Fondacaro), who seeks vengeance for his father's condition. Loaded with gratuitous nudity and violence, DECADENT EVIL is a worthy addition to the Band oeuvre.