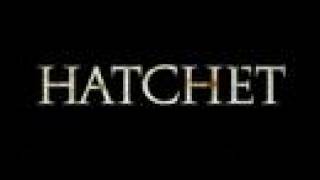 The slasher film all but died with the release of SCREAM (1996). From that point on, the genre became populated with slick studio productions starring the latest round of teen television stars, while gore and terror all but disappeared. HATCHET director Adam green clearly longs for the early days of the VCR, when films like MADMAN (1982), THE BURNING (1981), and THE PROWLER (1981) gave us psycho killers with grudges, deformities, and axes to grind—usually very graphically against the heads of promiscuous teens. HATCHET's killer is Victor Crowley, a grossly misshapen New Orleans bayou boogeyman who suffered an accidental hatchet to the face when his father tried to rescue him from a fire. When brokenhearted college boy Ben (Joel Moore) ditches his friends during a pre-Katrina Mardi Gras in favor of a cheesy Haunted Swamp tour, he finds himself on a boat full of misfits with an inexperienced tour guide (Perry Shen) just in from Detroit. Soon, the boat is sinking, and the passengers who also include an aspiring porn director and his two stars, a middle-aged couple, and a young woman with a vendetta against Crowley--come face-to-face with the monstrous killer.

Green clearly isn't against mixing humor in with his scares---HATCHET is rather liberal with laughs and has a generally lighthearted tone. But when the gore comes in, it's strong and noxious---though usually very dimly lit, this is messy stuff. He also shows his appreciation for horror film history by giving cameos to Robert "Freddy Krueger" Englund and Tony "Candyman" Todd and casting Kane "Jason Voorhees" Hodder as Crowley. HATCHET is a lively, funny, and reverent 1980's-style gore film that is certain to get a roomful of gorehounds howling with approval.

Behind the Mask: The Rise of Leslie Vernon (Blu-ray)
$30.30 Super Savings
Add to Cart