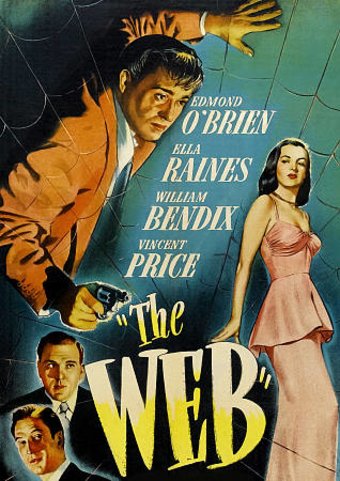 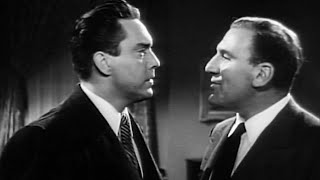 Bob Regan (Edmond O'Brien) -- a small-time attorney from the wrong side of the tracks who nonetheless has a lot of dedication -- is representing a vegetable pushcart owner (Tito Vuolo) in a damage suit against multi-millionaire Andrew Colby (Vincent Price). It seems Colby's car wrecked the man's cart, and he and his attorneys have been too busy running the world (or Colby's world) to deal with the case, so Regan barges right into the millionaire's office. Professing to be impressed with Regan's tenacity on behalf of his client, Colby offers to hire him, for a lot more money than he is making or ever stood to make, but not as an attorney -- rather, as a bodyguard/troubleshooter. It seems that Colby's been receiving threats lately, and he likes the way Regan looks after his clients. To aid him in his new job, Colby also secures a gun and permit for his new employee. Regan is so surprised at this whole turn of events in his life that he accepts the offer for the chance to finally get in on some the big money he sees around him. He's given entrée to Colby's upper-crust world, including his huge New York townhouse and all that goes with it, never smelling a rat. This is mostly because, apart from the money he's suddenly earning and traveling in the midst of, he's distracted by the presence of Colby's personal secretary, Noel Faraday (Ella Raines) -- about as pretty, intelligent, and seductive a female as Regan has ever seen, and who seems mutually intrigued by his rather earthy and plain-spoken presence in the Colby organization. Regan is a fresh dose of working-class honesty amid the elegance, affectation, and duplicity that oozes out of Colby's world, and on Regan's side of it he can hardly keep his hands off of her.

However, during Regan's first night on the job, a shot rings out from upstairs and he finds Colby in a struggle with an intruder carrying a gun -- and Regan shoots the man dead. The stranger turns out to be Leopold Kroner (Fritz Leiber), Colby's one-time business associate, who just finished a ten-year stretch for embezzlement of a million dollars. The threats seemed to come from Kroner, and there was a gun in his hand when Regan shot him, but that's not good enough for Lieutenant Damico of the NYPD; it's all a little too convenient that Colby's one-time partner gets himself killed that way, at the hands of some lawyer playing detective whose gun permit barely has the ink dry. Damico makes no secret of his doubts to Regan, or of the fact that he would like nothing more than to pull his friend in on a murder rap just for being a prize chump, mostly because he doesn't like murder and can't really see Regan as being as stupid as he seems. It turns out that he is just about that stupid, and is always a step behind Colby in trying to unravel the mystery of what really happened and how Kroner came to be in the house. Even Noel, for all of her intelligence and education, can't keep ahead of her employer's machinations; even as they dig deeper, more and more evidence gets planted implicating them both in a conspiracy, and before they can spring their trap, Damico is there ready to put the cuffs on both of them. But that's when matters get really interesting, as Damico begins to prove that if Regan isn't half as bright as he ought to be, the police lieutenant is a lot smarter than he looks or his job description calls for.