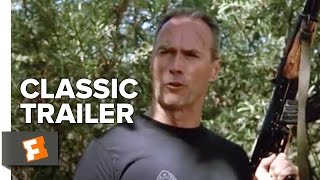 Clint Eastwood plays tough-as-nails marine sergeant Tom Highway in HEARTBREAK RIDGE. Highway is tough, but he's got his work cut out for him when he's assigned to whip a platoon of unruly new Marines into shape. He faces his own, often humorous battles with his ex-wife (Marsha Mason) and with his by-the-book commanding officers but still manages to teach his troops discipline and combat tactics. Eventually, their feelings toward him shift from resentment to respect, and all his lessons are put to use when the Grenada invasion unexpectedly brings the platoon into battle.

Clint Eastwood takes a revisionist approach to his tough-guy persona once again in HEARTBREAK RIDGE. As he had done in TIGHTROPE and PALE RIDER, and as he would do even more memorably in UNFORGIVEN, Eastwood probes beneath the surface of his prototypical character, a man who feels most at ease amid violence. HEARTBREAK RIDGE is a deft blend of service comedy, action film, and, most surprisingly, a genuine adult love story, as Sergeant Highway tries, with touching earnestness, to win back the affections of his ex-wife (Marsha Mason), after his devotion to the corps has kept them apart for too many lonely years. Meanwhile, he has to whip his inexperienced, undisciplined troops into shape. Highway often runs afoul of his own commanders, who resent his maverick ways and feel threatened by his combat experience and his chest full of medals. He gets the chance to prove his effectiveness yet again when his men are unexpectedly called to battle in Grenada. Like many of Eastwood's films, HEARTBREAK RIDGE is an underrated, solidly entertaining work.

Hannah and Her Sisters (DVD)
$13 Super Savings
Add to Cart