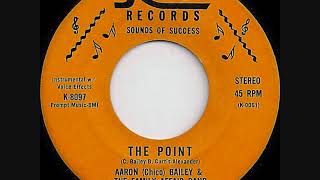 The title of Instrumental Explosion: Incendiary Funk & R&B Instrumentals 1966-1973 is pretty much self-explanatory. It's only different from other BGP label compilations (such as those found in their Super Funk and Super Breaks series) in its devotion to instrumentals, though you do hear some vocal chants and grunts here and there. And like those other BGP comps, this is populated with artists that even many soul and funk collectors will have never heard of, though some have modest cult reputations (the Pazant Brothers and the Afro Blues Quintet, the latter represented by the previously unreleased "Sunshine"); some are veterans primarily known for R&B outside the funk field (Lowell Fulson, Louis Jordan); and some are known mostly through associations with others (Pretty Purdie, aka top session drummer Bernard Purdie, and the Joe Tex Band). It's not quite as killer as it is rare, as much as some dancefloor habitu‚s might beg to disagree. Some of the cuts glide through pretty routine, if highly serviceable, riffs and grooves, falling well below the cream of early instrumental funk. But there are, as you'd expect with a label of BGP/Ace's standards, numbers that cook really hard, like Purdie's "Soul Drums," which may be the most famous item here as it was sampled by Beck for "Devil's Haircut." There's no denying the reasonably wide stylistic range of the chosen material, however, even if its debts to bigger names like James Brown, Junior Walker, and even Mongo Santamaria and Jimmy Smith are sometimes highly audible. Though James Brown-styled funk might be the deepest well of this particular pool of inspiration, there's room for all kinds of period accoutrements, like wah-wah guitar, bongos, football marching band horns, jazz flute, movie themes (Louis Jordan covers Lalo Schifrin's "Bullitt"!), Animals-like organ (on Fillmore Street Soul Rebellion's "Put Your Weight on It, Pt. 1)"), and searing blues guitar (on Lowell Fulson's "Thing"). There are even quotes from "Take Me out to the Ball Game" on the Fans' "Roly Poly Mickey Lolich," a tribute to Detroit Tigers baseball pitcher Mickey Lolich, complete with semiridiculous falsetto chants "roly poly Mickey Lolich." ~ Richie Unterberger

23%off
The Spinners
From Here To Eternally
$9.98 on Sale
Add to Cart