Buffy Sainte-Marie Power in the Blood 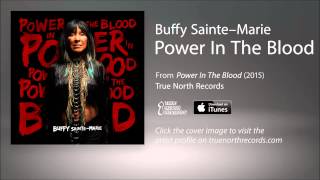 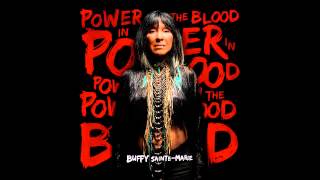 Audio Mixer: Michael Phillip Wojewoda.
Recording information: Chris Birkett Productions, Toranto, Canada; Revolution Recording, Toronto, Canada; The Orange Lounge Recordingn Studio, Toranto, Canada.
Photographers: Matt Barnes ; Kat Ho; Buffy Sainte-Marie.
Translators: Neal McLeod; Buffy Sainte-Marie.
If Buffy Sainte-Marie has a trademark as an artist it's that she doesn't give a damn what anybody thinks. Since 1964, she has fought to make the records she wants and has seldom allowed the vision of her producers or record labels to sway her intentions. She doesn't fit the mold of a "folksinger" as a septuagenarian any better than she did 50 years ago. Power in the Blood, her first new recording since 2008, is another highly individual statement from Sainte-Marie the artist and activist. Recorded in Toronto with three different producers -- Michael Wojewoda, Chris Birkett, and Jon Levine -- the album offers new material, reworkings of a few older songs, and choice covers. Among the latter is the militant title track by Alabama 3 that incorporates samples from the original with some new words by Sainte-Marie delivered in her declamatory style, with Birkett's urgent bass, drum loops, and pulsing synths urging her on. Her reading of UB40's "Sing Our Own Song" is introduced by a Cree chant, popping snare, and funky B-3. Set opener "It's My Way," the title cut from her 1964 debut, has been thoroughly re-visioned here. It's still a folk song, but Sainte-Marie pushes hard at the boundaries of the term's definition. Strident acoustic guitars introduce the track, but when she begins singing, dropped basslines, explosive kick drums, tom-toms, cello, and treated electric guitars offer its timeless message anew. The bluesy, post-psych rock in "Not the Loving Kind" (which first appeared on 1972's Moon Shot) is juxtaposed against a punchy R&B horn chart. Of the new songs, the hypnotic trip-hop groove in "Love Charms (Mojo Bijoux)," with its shuffle, shimmer, and slip, is fit for the club floor. A set standout, it is as steamy as it is romantic. The waltz "Ke Sakihitin Awasis (I Love You, Baby)" is simpler, more atmospheric. Although it's a sensual love song, it is for the globe's indigenous people. "The Uranium War" is a prequel to her celebrated "Bury My Heart at Wounded Knee." What begins as a meandering parlor song with a journalistic accounting of circumstances surrounding the murder of activist Ana Marie Aquash, its strident backing chorus transforms it into a chant for justice. Closer "Carry It On" is the album's anthem. Punchy guitars, insistent keyboards, and rolling drums support Sainte-Marie's soaring lead and massive chorus vocals. They exhort listeners to celebrate life and the earth, even during periods of trial and darkness. Power in the Blood's stylistic adventure and restless aesthetic spirit are indeed Sainte-Marie's hallmarks. But on their own, musical and sonic diversity do not a fine album make. It takes good songs and inspired performances to balance the equation, and this album has them all. ~ Thom Jurek

Buffy Sainte-Marie
It's My Way!
$11 CD Sale
Add to Cart

Buffy Sainte-Marie
Many a Mile
$10.90 CD Sale
Add to Cart

Buffy Sainte-Marie
Up Where We Belong
$16.30 CD Sale
Add to Cart