Kylie Minogue Step Back in Time: The Definitive Collection (3-CD) 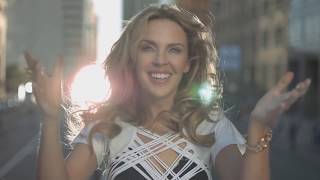 Liner Note Author: Kylie Minogue.
Photographer: Xevi Muntane.
2019's double-disc collection Step Back in Time is a fitting tribute to Kylie Minogue that celebrates her 30 years plus of pop stardom. The first CD covers the years between 2000 and 2019; the second tackles 1987 to 1999, when she was part of the Stock-Aitken-Waterman hitmaking machine. During those years, Kylie's image was brightly cheerful, and the songs SAW gave her were both of those things in spades. Taking a spin through the late-'80s/early-'90s SAW years as presented here is like eating candy canes one after the other -- the sugar high is a rush, but it fades fast. Tracks like "I Should Be So Lucky" and "Step Back in Time" are perfect disposable pop, hooky and simple with Kylie's earnestly sweet vocals perched on top like the proverbial cherry on top. It's all good nostalgic fun and Kylie sounds as game as can be, even when she has to take on Kool & the Gang's "Celebration." When she broke away from SAW and struck out on her own, things began to get more interesting, as 1994's dramatic trip-hop ballad "Confide in Me" shows. Kylie sounds grown-up and invested in the songs at last, and it's the start of her chameleonic journey through the charts. The rest of the collection shows her at home singing murder ballads with Nick Cave ("Where the Wild Roses Grow"), rocking out with Robbie Williams on "Kids," casting epic synth pop spells on "All the Lovers," edging gently into R&B territory on "Red Blooded Woman," and jacking the Pet Shop Boys' style on "Your Disco Needs You." She proves adept at all kinds of disco revamps, whether it's the French touch of "Wow," the bouncing disco-pop of "In My Arms," "Slow"'s space disco, or the pumping Euro-disco of "On a Night Like This." She even sounds good tackling pop-country on 2018's "Dancing." Unlike a lot of stars of her stature, Kylie rarely takes over a song with her voice; she chooses instead to meld with the arrangement and, like a skilled actress, becomes one with the sound. The timeless new wave disco hit "Can't Get You Out of My Head" is the perfect example of Kylie, the song and the sound coming together to make magic. This collection shows just how often that happened, especially after she was able to gain control of her own career. There have been quite a few other hits collection throughout the years, and while they display Minogue's talents in fine fashion, this one is truly definitive and essential for anyone who wants to look back on (or discover) her brilliant career. ~ Tim Sendra