In this fast-paced romantic drama, Kay Francis and George Brent portray a young couple threatened by gangsters eager to muscle in on the construction payroll. Stranded is an engaging snapshot of time and place. 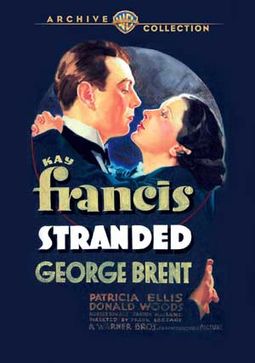 A world of girders and cable - that's where Mack Hale works, supervising the construction of the Golden Gate Bridge. In its shadow is a world of hopes and fears. That's where Lynn Palmer works, aiding travelers stranded in an unforgiving city during the depths of the Depression. In this fast-paced romantic drama directed by two-time Academy Award winner* Frank Borzage, Kay Francis and George Brent portray a young couple threatened by gangsters eager to muscle in on the construction payroll. The plot is crisp but Stranded is equally engaging as a snapshot of time and place as Lynn does her best for an unwed mother, a destitute boy, four giggling mail-order brides and more bewildered folks grateful for her helping hand.

In this romance, a social worker employed by Traveler's Aid finally is able to show her love to a construction foreman responsible for building the Golden Gate Bridge. She has loved him for nine years and is delighted that they can finally be together. Unfortunately, both of them are so busy that it is difficult to be together. Fortunately, they do eventually connect. The film contains actual footage of the construction of the great San Francisco Bridge.

Romance | Gangsters | Romances | Love | Criminals
This product is made-on-demand by the manufacturer using DVD-R recordable media. Almost all DVD players can play DVD-Rs (except for some older models made before 2000) - please consult your owner's manual for formats compatible with your player. These DVD-Rs may not play on all computers or DVD player/recorders. To address this, the manufacturer recommends viewing this product on a DVD player that does not have recording capability.