The Affair of the Necklace R

In pre-Revolutionary France, a young aristocratic woman left penniless by the political unrest in the country must avenge her family's fall from grace by scheming to steal a priceless necklace. 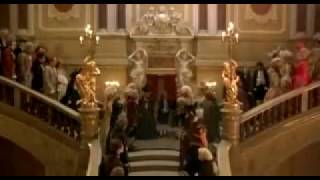 This tale of intrigue and corruption is based on a true account of 18th Century French noblewoman Jeanne de la Motte-Valois (Hilary Swank), whose family has been dispossessed of status and title by the king. To restore honor to her name and reclaim her family estate, Jeanne must have her lineage officially authenticated at the court of Versailles. After several unsuccessful attempts to obtain an audience with Marie Antoinette (Joely Richardson), Jeanne finds an ally in male courtesan Rétaux de la Villette (Simon Baker), who advises her to try and gain influence at court by attracting a wealthy sponsor: Cardinal Rohan (Jonathan Pryce), a ruthless man whose appetite for women is only exceeded by his appetite for power. Aided by Villette, her estranged husband Nicolas (Adrien Brody), and an enigmatic foreign mystic, Count Cagliostro (Christopher Walken), Jeanne becomes embroiled in an elaborate scheme involving the cardinal, the queen, and the theft of a priceless diamond necklace.

Theatrical Release
This product is made-on-demand by the manufacturer using DVD-R recordable media. Almost all DVD players can play DVD-Rs (except for some older models made before 2000) - please consult your owner's manual for formats compatible with your player. These DVD-Rs may not play on all computers or DVD player/recorders. To address this, the manufacturer recommends viewing this product on a DVD player that does not have recording capability.

23%off
The Scarlet Pimpernel
$6.90 Super Savings
Add to Cart