The Late Night Double Feature: X: The Fiend from Beyond Space / The Wall People

Currently Out of Stock: We'll get more as soon as possible
Notify Me When Available
Add to Wishlist
Format:  DVD
sku:  MIHM 12134D
Our customers love us! 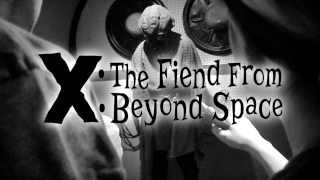 X: The Fiend from Beyond Space: On a decades-long mission to Alpha Centauri, the crew of the UESPA spaceship Endeavor are awakened from LD-sleep to find themselves in orbit around a rogue planet. Finding nothing but a seemingly dead alien on the planet's surface, the Captain decides to bring it aboard for further study. But, the crew quickly realize the creature is not dead... and it's very hungry.

The Wall People: Following the death of his wife, scientist Barney Collins (Douglas Sidney) finds solace in his new role as a single dad to his only son. However, when the boy disappears from his bed under mysterious circumstances, Barney loses his grip on reality and becomes a shut in. Eight years later, he resurfaces with a wild theory: his son has been taken by an otherworldly entity that steals sleeping children through interdimensional portals in their bedroom walls! He enlists the help of his old colleagues (Mike Cook and James Norgard reprising their roles as Dr. Edwards and Dr. Gabriel, respectively) to potentially save his son from the clutches of this inhuman threat?or prove he is certifiably insane!