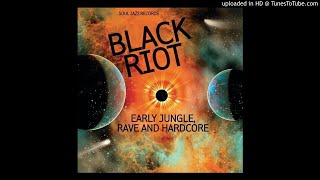 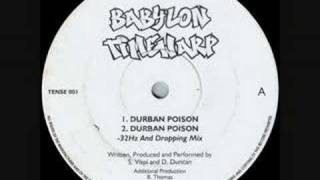 Soul Jazz Records is responsible for releasing dozens of essential, definitive reggae compilations, so it seems natural that when they turn their attention to U.K. dance music, they tend to spotlight styles closely informed by dancehall and dub, particularly jungle and dubstep (during its pre-2010 heyday). While 2007's Rumble in the Jungle focused on vocal-heavy ragga-jungle, preceding the release of a much-needed anthology of genre forefathers the Ragga Twins, Black Riot mines the period during the early '90s when breakbeat hardcore mutated into jungle. During this era, the rave scene was conquering British popular culture, and some of the most cartoonish examples of the scene's music became major pop hits, while sensationalist stories about illegal parties and drug-related deaths were all over the news. Given all the negative hype surrounding rave culture, it can be easy to overlook just how creative and exciting most of the music actually was. The tracks on this compilation generally feature fast, complex breakbeats along with swaying, half-time bass lines and vocal samples derived from reggae and hip-hop tracks, never overlooking the scene's roots. Some of the compilation's tracks are unabashedly positive and uplifting without overdoing it -- just bask in the choppy breaks and bleep melodies of DJ Dubplate's "Tings a Go On." Others gleefully push things into rougher territory, such as the KRS-One-sampling heaviness of "RK1" by the Terrorist (aka the reliably brutal Ray Keith), or the classic "Ganja Man" by Krome & Time, which took their sound in a much fiercer, deadlier direction than their earliest rave anthems on Suburban Base. Trip One's "Snowball Remix" is a manic flurry of scrambling breaks and eerie droning sounds, working in a dialogue sample from Hellraiser 3 yet still sounding adrenaline-spiked rather than truly frightening. The Freaky's "Time and Age" is vintage U.K. hardcore rap with booming, rave-ready breakbeats, and "House Sensation" by Nu Jacks is slower, acid-tinged bleep-house, joined by Ivory Ranks' deft, dizzying ragga-toasting. ~ Paul Simpson

15%off
Various
Transformers: The Movie Soundtrack
$36.70
Add to Cart