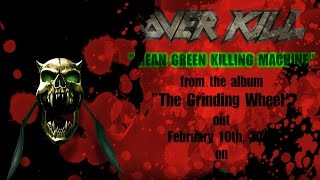 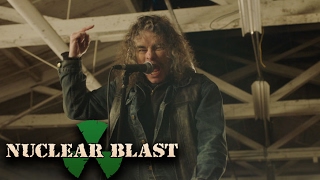 The New Jersey thrash legends' 18th full-length outing, Grinding Wheel arrives a little over two years after the release of 2014's uncompromising White Devil Armory. Produced by the band and mixed by Andy Sneap, the ten-track set -- the digital version includes a meaty studio version of Thin Lizzy's "Emerald," a song the band has covered live for years -- snaps necks with impunity, but it does so with a structural inventiveness that's eluded some of Overkill's most recent offerings. While the band hasn't lost its knack for dropping unrelenting artillery blasts of breakneck, old-school thrash -- "Goddamn Trouble," "Red, White, and Blue" -- there's a nervy, classic rock/NWOBHM undercurrent that runs through Grinding Wheel that owes more to Judas Priest and Accept than it does Testament and Metallica. "Mean, Green, Killing Machine," as thrilling an opening number as the band has penned in a decade, gets things off to a gloriously brutal start, with the aforementioned "Goddamn Trouble" and fiery lead single "Our Finest Hour" tearing through like a pair of Marshall Stack-born F5 tornados to sort through the detritus. The meaty "Shine On" impresses with its groove-laden, almost Southern rock-inspired swagger, the epic title cut feels like it was pulled from the same sessions that birthed Iron Maiden's Killers, and the aptly named "Come Heavy," a decidedly upbeat, Sabbathy doom anthem, delivers a Ron Lipnicki-led master class in heavy metal drumming. Even at its most frivolous -- "Let's All Go to Hades" could be a Dethklok song -- Grinding Wheel never feels like anything less than vital. Overkill, or to be more specific, founding vocalist Bobby "Blitz" Ellsworth and bassist D.D. Verni, have been at this racket for nearly four decades now, and the fact they're continuing to dial up the intensity instead of resting on their considerable laurels is impressive, to say the least. ~ James Christopher Monger

Hatesphere
Ballet of The Brute
$8.70
Add to Cart

55%off
AxeWound
Vultures
$5
Add to Cart