Also released as:
Curse of The Headless Horseman for $5.95
91% recommend us! 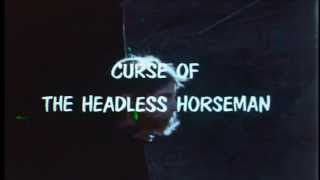 Curse of the Headless Horseman (1972) - Trailer

A phantom draped in a long black cloak, riding atop a stallion and carrying a bloody severed head, haunts the grounds of Callahan Ranch. A young couple, Mark and Brenda, inherit the isolated ranch under the condition that they make it profitable within six months. Otherwise, the ranch falls into the hands of a sinister caretaker named Solomon who has plans of his own. Joined by a group of their hippie friends, the couple discovers that the ranch, now used to perform wild west shows for locals and tourists, is rumored to be haunted by a headless spectre in search of eight ghostly gunfighters. When the phantom horseman appears during moonlit nights, members of the hippie group are marked for death with the splashed blood of the severed head.