A World War I veteran suffering from shellshock develops a split personality as a mad bomber destroying England's railways. A true rarity never before released on any home video format. 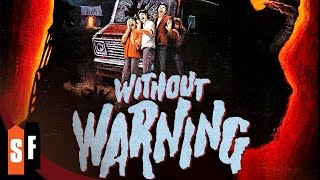 England is rocked by a series of train disasters, all caused by sabotage. Police are on the hunt for the perpetrator, who is always spotted leaving the scene with a scarf around his face. The newspapers dub him "The Menace." Brilliant engineer Stephen Ronsart, a demolitions expert during World War I, is called in to consult. No one suspects that Ronsart is secretly the Menace - not even himself! Shellshock suffered during the war turned the man into a split personality, and now the kind-hearted engineer is driven to acts of wanton destruction whenever he is reminded of his horrific experiences. As more and more lives are lost in the Menace's campaign of terror, the police race against the clock to bring him to justice...not realizing the madman is aware of their every move and can plan accordingly...

A visually striking film with unusual camera angles, lighting effects and dramatic close-ups worthy of early Hitchcock, Without Warning is truly a lost classic. As the tormented madman torn between his good and bad selves, Hungarian character actor Victor Varconi gives a performance that may be a career best. Born Mihály Várkony in 1891, he moved to the United States in 1924, where he quickly became a favorite of Cecil B. DeMille, who cast him in many of his silent-era epics, most notably as Pontius Pilate in The King of Kings (1927). Varconi's thick Hungarian accent made the transition to sound difficult, but with DeMille's continued patronage, he found a niche playing "ethnic" roles, including characters of French, Hispanic, or Germanic descent. Among these was a Spanish guerilla fighter in the classic For Whom The Bell Tolls (1943) with Gary Cooper and Ingrid Bergman. World War II saw him often cast as Nazis, as in John Farrow's The Hitler Gang (1944), in which he played Rudolph Hess. His last role was as a scientist in Alex Gordon's sci-fi feature The Atomic Submarine (1959). Newly unearthed and unseen since 1950s television airings, Without Warning casts new light on this underrated actor.

Humanoids from the Deep
$17.90 Super Savings
Add to Cart

Customer Rating:
Based on 4660 ratings.