Lost Game Shows of the 50s

Four rare programs from the heyday of TV game shows - 'I've Got a Secret', 'Queen for a Day', 'Strike It Rich', and 'The Name's the Same'. 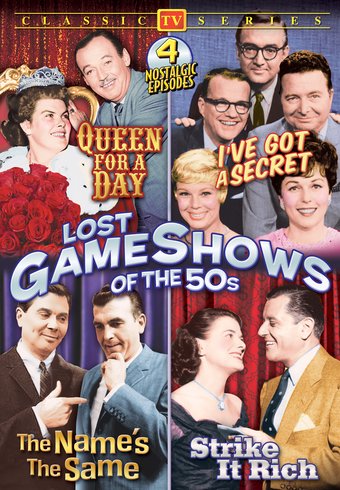 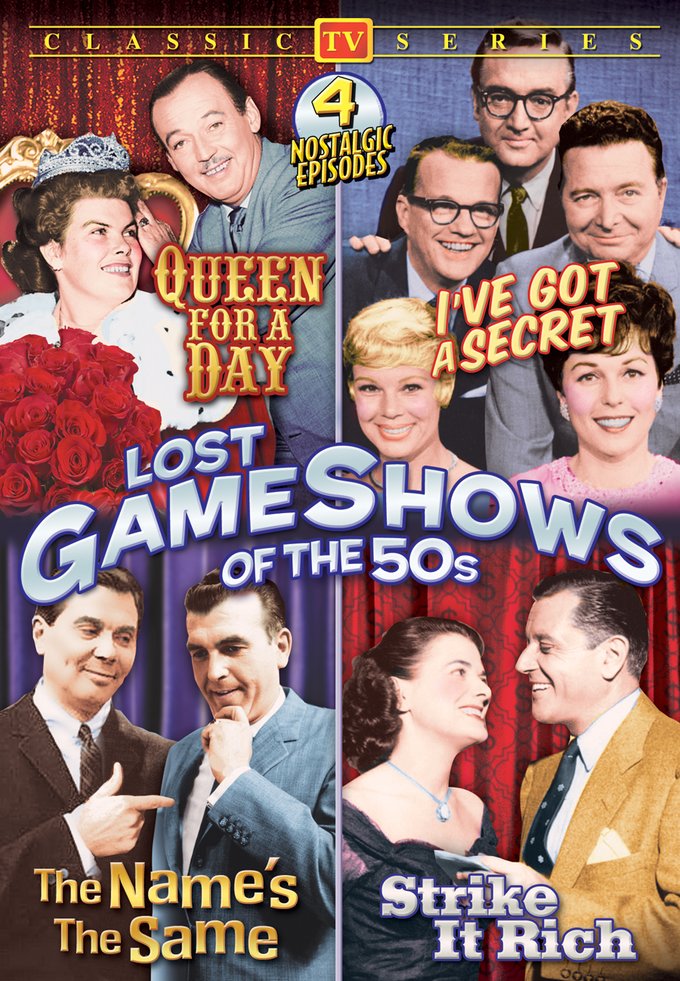 The 1950s was the heyday of TV game shows where it seemed like anyone with a dream and a little luck could win fabulous cash prizes. Have a blast from the past with these outrageously entertaining rarities.

I'VE GOT A SECRET (1966): Celebrity panelists compete to be the first to uncover the secrets of invited guests on America's number one game show, I've Got a Secret. Produced on the heels of the popular show What's My Line, I've Got a Secret proved to be even more successful, running for fourteen years. Television star Garry Moore hosted the show till 1964, when he was replaced by Steve Allen. In this 1966 show, hosted by Allen, the invited guests are the sons of famous people - all of whom seem to want to be rock and roll stars! The episode concludes with Steve Allen and his son Brian performing a duet on piano. The panel includes Miss America 1945, Bess Myerson, Friday the 13th's Betsy Palmer, Bill Cullen, and Henry Morgan.

QUEEN FOR A DAY (1958): Billed as "the Cinderella show", Queen for a Day saw downtrodden female contestants compete for brand-new household appliances. They did so by telling tales of woe to host Jack Bailey, whose down-home demeanor wasn't always the most sensitive. After a woman tells him that her husband has had two heart attacks and her son has polio, Jack's response is, "Say! This is not your season!" Whoever had the most miserable life inevitably wound up winning a new washer and dryer, tableware, etc. (this episode's winner is a poor woman whose husband was "accidentally" shot by "his buddy" while hunting.) Though many criticized Queen for a Day for capitalizing on its participants' suffering, that didn't stop it from being successful. The show lasted for eight years on major network television, and even expanded from 30 to 45 minutes because the sponsors were so eager for additional air time.

STRIKE IT RICH (1954): Strike it Rich was another show in which contestants were invited to pour out their heart and souls for a chance to win some money. Host Warren Hull (who had played the Green Hornet and the Spider in movie serials) listened patiently as guests related the tragedies that had made them destitute, and then asked them four (relatively simple) questions. The amount awarded was usually not enough to turn their lives around..but it was the thought that counted. Sometimes, a celebrity guest would participate, representing a worthy cause (as in this episode, in which When Worlds Collide's Richard Derr tries to win money for a disabled veteran who wants to buy a bunny farm.) Strike It Rich spurred a great deal of criticism, as aspiring low-income contestants often traveled hundreds of miles for a chance to participate, only to find themselves stranded in New York City when they were turned away. Perhaps because of this controversy, CBS destroyed every episode after the show went off the air in 1957, with this broadcast being one of the few to miraculously escape the purge.

THE NAME'S THE SAME (1954): On The Name's the Same, a celebrity panel must deduce the names of guests who share their name with a famous (or infamous) person - for instance, an Iowa housewife named "Jesse James." In addition, an actual famous person would stop by (in this episode, it's surrealist painter Salvador Dalí.) The panelists are Bess Myerson, Joan Alexander (the voice of Lois Lane on radio's Adventures of Superman), a pre-Match Game Gene Rayburn, and Mad Libs creator Roger Price.