The Trilogy (On the Run / An Amazing Couple / After Life) (3-DVD) (French, Subtitled in English) 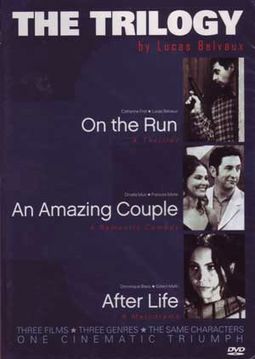 French director Lucas Belvaux attempted one of the most daring experiments in modern cinema with 2002's THE TRILOGY, a trio of interconnected films that focus on the same characters and storylines but employ three different genres for vastly divergent meanings and textures. The first film, ON THE RUN, takes the form of a noirish thriller for its story of a leftist revolutionary who escapes from prison and is doggedly pursued by a troubled cop with a drug-addled wife. The second film, AN AMAZING COUPLE, is an unconventional romantic comedy about a middle-aged hypochondriac whose strange behavior leads his wife to believe he is having an affair. The third and final film, AFTER LIFE, is a moving melodrama that connects the previous films' disparate threads for a RASHOMON-like study of how an event or character cannot always be understood from a single vantage point. While each film ably stands on its own, the serious filmgoer can only benefit from experiencing them together in this collection. See individual titles for more detailed plot synopses.