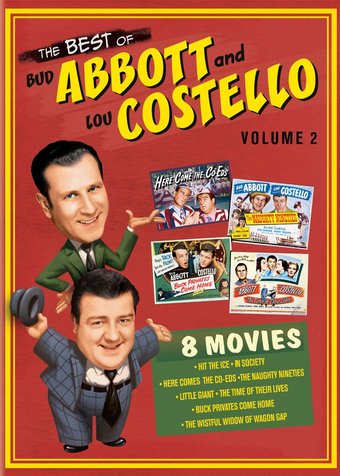 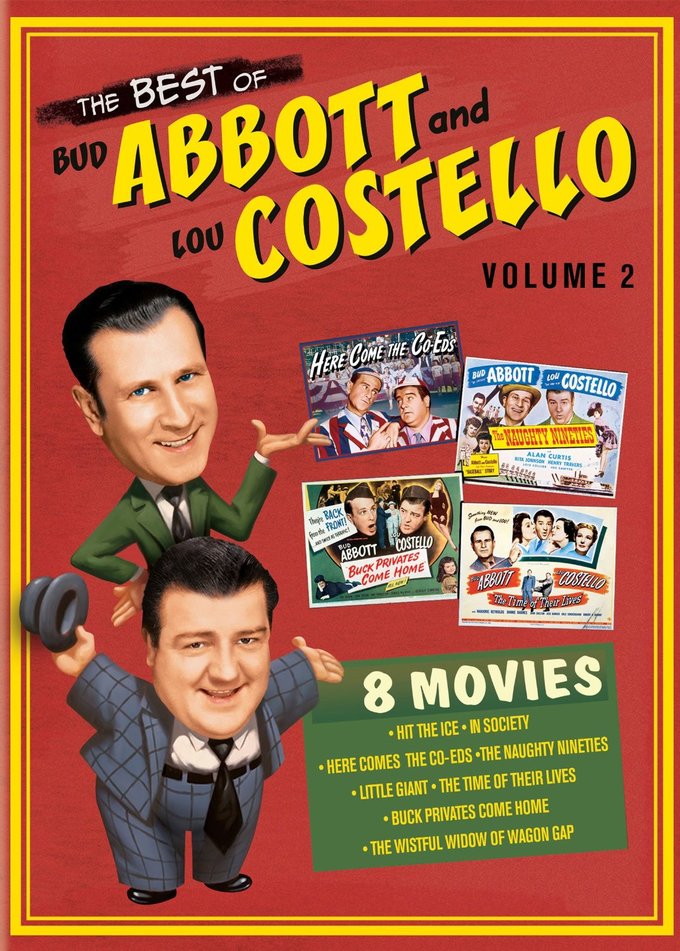 HIT THE ICE The Abbott & Costello vehicle Hit the Ice started life as satire of health clinics, with Lou Costello cast as a hypochondriac who used a streetcar conductor's change-purse to dispense pills to himself. By the time the film hit the screens, it was a standard A&C mélange of comedy, music and fast-paced chase scenes, with nary a pill in sight. Bud and Lou are cast as would-be photojournalists Flash and Tubby, who inadvertently snap a picture of two bank robbers leaving the scene of the crime. Accused of knocking over the bank themselves, our heroes find it expedient to hide out at a Sun Valley ski resort.

IN SOCIETY For their first film in a year, Bud Abbott and Lou Costello play Eddie and Albert, a pair of plumbers hired to fix the pipes of a fancy society mansion. While a masquerade party takes place on the first floor, our heroes wreak havoc in the bathroom on the second floor. The angry owners (Thurston Hall, Netta Packer) shoot off a letter of complaint to the plumbers which gets mixed up with an invitation for a fancy weekend party. Thus it is that Eddie and Albert, accompanied by their female cab-driving pal Elsie (Marion Hutton), show up dressed to the nines at a posh country estate.

HERE COME THE CO-EDS The scene is a financially strapped girl's college, where professional dancer Molly (Martha O'Driscoll) lands a scholarship. Molly's manager-brother Slat (Bud Abbott) has arranged this as a means to publicize his sister's showbiz career, which angers the college's chairman of the board (Charles Dingle), who threatens to foreclose on the school. To keep tabs on Molly and also find ways of raising the mortgage money, Slats and his pal Oliver (Lou Costello) takes jobs as school caretakers, immediately running afoul of ill-tempered groundskeeper Johnson (Lon Chaney Jr.).

LITTLE GIANT Bud Abbott and Lou Costello play separate characters, rather than the usual smart guy/dumb guy comedy team. In Giant, Costello is cast as farm boy Benny Miller, a would-be salesman who goes to work for the Hercules Vacuum Cleaner company. Almost immediately running afoul of crooked general manager Morrison (Bud Abbott), bumbling Benny is about to be fired when he is convinced by a bunch of practical jokers that he has the power to read minds.

THE TIME OF THEIR LIVES Lou Costello plays a Revolutionary War-era tinker, whose prized possession is a letter from George Washington, commending Costello as a loyal patriot. Costello's lady love is Anne Gillis, maidservant to aristocratic Jess Barker. Costello's rival in romance is Barker's butler Bud Abbott, who locks the tubby tinker in a trunk to keep him away from Gillis. Meanwhile, Gillis stumbles onto a plot to betray the Colonial Armies, masterminded by Barker. THE NAUGHTY NINETIES Abbott and Costello's The Naughty Nineties takes place aboard a 19th century showboat, owned by kindly Captain Sam (Henry Travers). Bud Abbott plays the showboat's leading man Dexter Broadhurst, while Lou Costello is handyman Sebastian Dinwiddie. A group of slick gamblers (Alan Curtis, Rita Johnson and Joe Sawyer) cheat Captain Sam out of his boat, turning the place into a floating gambling palace, now it's up to Dexter and Sebastian to foil the villains.

BUCK PRIVATES COME HOME After serving with a notable lack of distinction in WW2, Corporal Slicker Smith (Bud Abbott) and Private Herbie Brown (Lou Costello) return to the US. Unbeknownst to their sourpussed sergeant Collins (Nat Pendleton), Slicker and Herbie have smuggled cute little war orphan Evie (Beverly Simmons) past the immigration authorities. In their efforts to find a decent home for Evie, our heroes return to the prewar "jobs" as sidewalk salesmen, and then make a disastrous attempt to collect their GI bonus money while trying keeping Evie safe from deportation.

THE WISTFUL WIDOW OF WAGON GAP The Abbott & Costello western spoof The Wistful Widow of Wagon Gap is predicated on an actual Montana law of the 19th century, which dictated that if a man killed another in a gun duel, that man was responsible for the care and support of the victim's family. Travelling salesmen Duke (Bud Abbott) and Chester (Lou Costello), freshly arrived in the wide-open western town of Wagon Gap. No sooner has Chester reached Main Street than he is falsely arrested for the murder of Hawkins, the town layabout. He and Duke are spared the hangman's noose when the genially corrupt Judge Benbow (George Cleveland) reminds the jury that Chester is now responsible for Hawkins' debts and family.