The Damned Black is the Night: The Definitive Anthology (2-CD)

Get email alerts for The Damned
Available: Usually ships in 3-5 business days
Only 7 copies left
Add to Cart
Add to Wishlist
Format:  CD  (2 Discs)
sku:  6WGYV
Our customers love us! 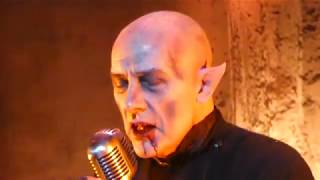 Liner Note Author: Eugene Butcher.
Photographer: Dod Morrison.
The first Damned compilation album, The Best of the Damned, appeared in 1981, when the pioneering punk upstarts had been recording for all of five years. Since then, there have been plenty of box sets, multi-disc anthologies, and rarities collections documenting every nook and cranny of the group's career as they've slipped into their fourth decade. So how badly does the world need one more? That is a question each fan can only answer for themselves, and the title of 2019's Black Is the Night: The Definitive Anthology sounds a bit more boastful than accurate. Arguably the best and most satisfying overview of the Damned's body of work, The Light at the End of the Tunnel, was released in 1990, and if nothing else, Black Is the Night delivers a useful update, covering their surprisingly lively release schedule in the '90s, '00s, and '10s along with the acknowledged classics of the '70s and '80s. Like The Light at the End of the Tunnel, Black Is the Night is sequenced thematically instead of chronologically, which means you have to wait until the midpoint of disc one to get their classic Stiff Records sides from 1977, while the 2001 comeback Grave Disorder has already been represented. However, the track listing does make sense of the often elusive through line of the Damned's history, as Dave Vanian's showman's vocals, Captain Sensible's clever melodies, and their smarter-than-you-think wit unites the music as they travel from punk to garage rock to hard rock to pop to goth to a few pit stops in between. The presence of some examples of their more recent work shows they're still in touch with their various muses, and for all their sonic shape-shifting, this is a far more consistent listening experience than one would expect. The set also includes informative and entertaining liner notes as well as Pete Frame's brilliant Damned family tree, though you'll want to break out a magnifying glass if you want to read them. If anyone is still waiting to be introduced to the Damned, Black Is the Night does an admirable job of sussing out the high (or higher) points of their many eras, and for fans, it makes for a fine trip down memory lane with a few pleasant surprises. ~ Mark Deming

The Damned
Music for Pleasure
$13.60 CD Sale
Add to Cart

91%off
The Damned
Anything
99¢ on Sale
Add to Cart

The Damned
Music for Pleasure
$13.60 CD Sale
Add to Cart

Sisters Of Mercy
Floodland
$26.95 on Sale
Add to Cart