Buster Keaton plays a timid movie theater projectionist who dreams of becoming a great detective in one of his most spectacular feature films. Plus the shorts 'The Paleface' (1921), 'The Playhouse' (1921) and 'The Frozen North' (1922). 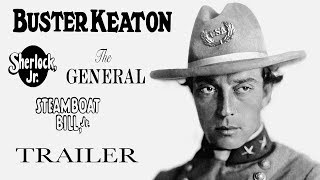 "The invention and ingenuity of Sherlock Jr. is unsurpassed by anything in Buster Keaton's work." - Ivan Butler, Silent Magic

Buster plays a put-upon movie theater projectionist stuck in a life of drudgery. He's engaged to a pretty girl, but spends most of his time dreaming of a life of adventure, just like the stars on the movie screen. One day while visiting his sweetheart, her father's watch is mysteriously stolen, leading everyone to believe Buster is responsible. Buster makes himself over into "Sherlock Jr.", the world's greatest detective, to clear his name. But does Buster really know what he's doing, or is this all just another daydream?

In his book The Parade's Gone By, historian Kevin Brownlow called Sherlock Jr "undoubtedly Buster Keaton's cleverest film." It may have been very different had it been made by its original director - Roscoe 'Fatty' Arbuckle. Keaton was looking to help out his former mentor after his involvement in the Virginia Rappe murder case. However, after three days of filming, Arbuckle proved too short-tempered to be of much use, so Buster got him a job directing The Red Mill starring Marion Davies, instead. The film's most famous scene is when Keaton, as the daydreaming projectionist, climbs up onto the movie screen, only to be tossed back into the audience by the actors. This illusion was accomplished by using deep perspective and a stage constructed through an opening on the movie theater set. This metatextual device of "stepping into a movie" would be highly influential on other directors, most notably Woody Allen on The Purple Rose of Cairo (1985).

THE PLAYHOUSE (1921): Buster is a stagehand forced to play every role in the big show - the conductor is Buster Keaton, everyone in the orchestra is Buster Keaton, and onstage are Buster Keaton's Minstrels! Buster achieved this hallucinatory effect by using double exposure to make it appear as if multiple Buster Keatons were on screen interacting.

THE PALEFACE (1921): After a big corporation tries to steal their land, an Indian tribe vows to kill the next white man they see. Unfortunately, that happens to be Buster, who's just looking to collect some butterflies! After surviving being burned at the stake, he's made an honorary member of the tribe and helps thwart the robber barons' land acquisition scheme.

THE FROZEN NORTH (1922): Keaton takes the subway to Canada (!) where he terrorizes the townsfolk imitating cowboy William S. Hart and Prussian aristocrat Erich von Stroheim. This was the only time Buster tried his hand at parodying other silent movie stars. The ice fishing sequence, where a tug on his line dunks the comedian in freezing cold water, is a classic Keaton gag.

18%off
The Kid (Cantonese, Subtitled in English)
$16.40 Super Savings
Add to Cart