Baseball rookie Frank X. Farrell is a phenom, a kid who can hurl the ol' horsehide and swing the lumber so well he may lead Chicago's beloved Cubbies to a pennant. Joe E. Brown brings a whirlybird wind-up and a love for the game to this comic tale. 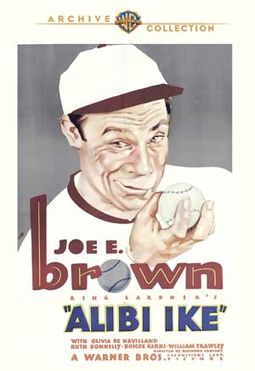 Baseball rookie Frank X. Farrell is a phenom, a kid who can hurl the ol' horsehide and swing the lumber so well he may lead Chicago's beloved Cubbies to a pennant. He can sure spin excuses and blarney, too! Joe E. Brown brings a whirlybird wind-up and a love for the game to this comic Ring Lardner tale. You can't tell the players without a scorecard but sports-minded moviegoers recognized Bob Meusel, Jim Thorpe and other former professional ball players on the film's diamonds. But an even bigger treat for viewers then and now is the first screen appearance of a future movie immortal singled out as "a charming newcomer" by Frank S. Nugent in The New York Times. Her name: Olivia de Havilland.

In this rollicking adaptation of Ring Lardner's short story, Joe E. Brown plays an ace baseball player whose insistence upon making up excuses earns him the nickname "Alibi Ike." In the course of his first season with the Chicago Cubs, Brown also falls in love with Olivia De Havilland, sister-in-law of the team's manager. Brown's "alibi" habit prompts De Havilland to walk out on him, whereupon he goes into a slump-- which coincides with attempts by gamblers to get Brown to throw the World Series. The plot weaves its way towards a climax in which Brown escapes the gamblers by commandeering an ambulance and driving onto the ball field during the final Series game. ALIBI IKE was the most successful of Joe E. Brown's "baseball trilogy" (which included ELMER THE GREAT and FIREMAN SAVE MY CHILD), and one the best baseball comedies of all time.

Adventure | Mishaps | Escape | Kidnapping | Love | Baseball Players | World Series
This product is made-on-demand by the manufacturer using DVD-R recordable media. Almost all DVD players can play DVD-Rs (except for some older models made before 2000) - please consult your owner's manual for formats compatible with your player. These DVD-Rs may not play on all computers or DVD player/recorders. To address this, the manufacturer recommends viewing this product on a DVD player that does not have recording capability.