With large confidence and an even larger hat, cattleman Calvin Jones (rubber-faced comic Joe E.Brown) rolls along the lighted cow path of Broadway. He has $20,000 to invest in a show, intending to skedaddle back to Texas with his profits. 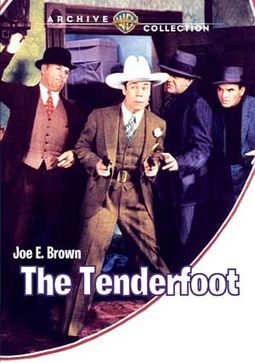 With large confidence and an even larger hat, cattleman Calvin Jones (rubber-faced comic Joe E.Brown) rolls along the lighted cow path of Broadway. He has $20,000 to invest in a show, intending to skedaddle back to Texas with his profits. Faster than you can say flopperoo, the producers of the show Calvin bankrolls button it up and keep the dough. Now add mobsters eager to extort some cash and romance with a perky secretary (Ginger Rogers), and it's clear Calvin's got some wrangling to do before he's back in those wide-open spaces. George S. Kaufman's fish-out-of-water stage farce "The Butter and Egg Man" (Richard Carle shares an on-screen story credit) hits town as The Tenderfoot. Yeeee-haw, Manhattan!

George S. Kaufman's sturdy stage comedy THE BUTTER AND EGG MAN was the inspiration for no fewer than four Warner Bros. talkie versions. The first of these was THE TENDERFOOT, starring Joe E. Brown as a wealthy but naive cowboy alone in the Big Apple. The producers of a down-and-out musical revue hope to convince Brown to put his money in their show, sending out cute chorine Ginger Rogers as the "convincer." After having his heart broken a few times and tangling with gangsters, Joe comes through and the show goes on. Warners followed THE TENDERFOOT with a 1937 musicalization of BUTTER AND EGG MAN, DANCE CHARLIE DANCE; this in turn was remade as AN ANGEL FROM TEXAS in 1942. The final variation on this theme (so far!) was THREE SAILORS AND A GIRL (53).

Romance | Cowboys | Gangsters | Romances | Behind The Scenes | Love
This product is made-on-demand by the manufacturer using DVD-R recordable media. Almost all DVD players can play DVD-Rs (except for some older models made before 2000) - please consult your owner's manual for formats compatible with your player. These DVD-Rs may not play on all computers or DVD player/recorders. To address this, the manufacturer recommends viewing this product on a DVD player that does not have recording capability.