Funnyman Joe E. Brown plays Jojo Mullins, who has an eye for the ladies although his heart belongs to the manager of the health club where he works. Eager to show the ring prowess he learned by correspondence, he gets his chance in a big-time match. 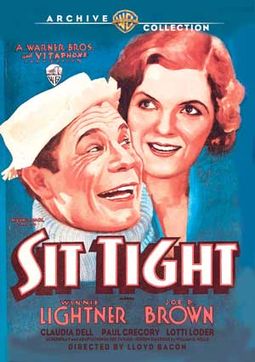 A movie musical about... wrestling? Turns out the public grew weary of musicals while Sit Tight was made, so most of the tunes were jettisoned prior to release. What remains is a wrestling comedy filled with plenty of pre-Code friskiness. Athletic funnyman Joe E. Brown plays Jojo Mullins, who has an eye for the ladies although his heart belongs to the manager (Winnie Lightner) of the health club where he works. Eager to show the ring prowess he learned by correspondence, Jojo gets his chance in a big-time match. Paul Gregory and Claudia Dell (rumored to be the model for Columbia Pictures logo) play the subplot's young lovebirds in this energetic comedy that's one of nearly 50 films directed by Lloyd Bacon in the 1930s.

Joe E. Brown had a fondness for playing milquetoast characters forced into situations calling for acute athletic prowess, mainly because he was an excellent athlete himself. In SIT TIGHT, our hero, a would-be wrestler named JoJo, is forced to enter the ring and face down a musclebound masked opponent (Frank S. Hagney). Making matters worse, the masked marauder is convinced that his wife has been fooling around with JoJo. To pad out the storyline, JoJo is knocked out early in the proceedings, whereupon he dreams he's a sultan surrounded by harem girls. Contractually, Winnie Lightner was afforded top billing, and there's a sappy attempt at a romantic subplot involving Paul Gregory and Claudia Dell, but SIT TIGHT is Joe E. Brown's picture all the way.

Rivalry | Champions | Wrestlers | Competitions
This product is made-on-demand by the manufacturer using DVD-R recordable media. Almost all DVD players can play DVD-Rs (except for some older models made before 2000) - please consult your owner's manual for formats compatible with your player. These DVD-Rs may not play on all computers or DVD player/recorders. To address this, the manufacturer recommends viewing this product on a DVD player that does not have recording capability.