Dracula Dead and Loving It PG-13

Dracula: Dead and Loving It 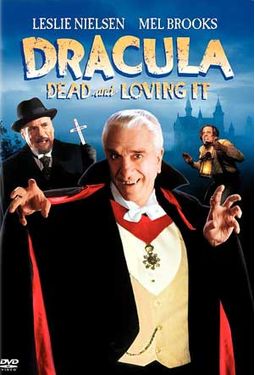 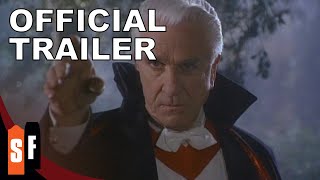 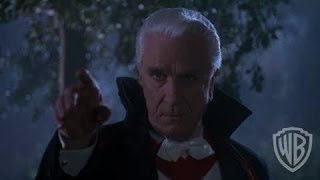 "We should have put newspapers down."
- Professor Van Helsing (Mel Brooks), after driving a stake through a vampire's heart and seeing the mess all the blood has made on the floor.
"Children of the night...What a mess they make!"
- Count Dracula (Leslie Nielsen)
"Yes! We have No-sferatu...we have No-sferatu today!"
- Dr. Steward (Harvey Korman) when asked if he has the book NOSFERATU in his library
"Listen to them. Children of the night. What music they make."

Mel Brooks aims his pun-gun at the Dracula legend--and, particularly, at Francis Ford Coppola's 1992 film BRAM STOKER'S DRACULA--in this undead spoof. In DRACULA: DEAD AND LOVING IT, Leslie Nielsen brings the deadpan humor of the NAKED GUN series to the role of the infamous vampire. Between its many sight gags and puns, the movie sticks fairly closely to the classic story line of previous screen versions, beginning with Renfield's (Peter MacNicol) visit to Count Dracula's creepy Transylvanian castle on legal business. The solicitor becomes Dracula's insect-munching slave and the two journey to London, where the count racks up more victims, most notably the busty Lucy Westenra (Lysette Anthony). When Dracula's archenemy, Dr. Van Helsing (Mel Brooks), attempts to end the vampire's reign of terror, oodles of mayhem and gallons of fake blood are let loose on Victorian London. As one would expect from Brooks and Nielsen, this particular Dracula--who is prone to falling down staircases and crashing into windows when he takes on bat form--becomes the butt of numerous jokes. The cinematic jokes are even better--many of them derived directly from Coppola's lush and innovative film techniques and the bad British accents that abound in his DRACULA film. Horror will never seem the same again.