Indiscretion of an American Wife

Two strangers in a train station embark upon a doomed love affair in this enthralling romance from director Vittorio De Sica (The Bicycle Thief) and producer David O. Selznick (Gone With the Wind). 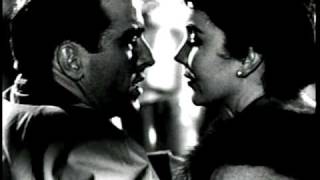 Two lovers spend the night in a Rome train station, undecided on whether or not to continue their affair. The woman, formerly a dedicated housewife and mother, cannot imagine life without her family back home in America, while the man cannot imagine a life without her. As the panorama of life in the station unfolds around them, they both realize that saying goodbye will be more painful than either of them could possibly have imagined...

After the relative failures of Duel in the Sun (1946) and The Paradine Case (1947), legendary producer David O. Selznick was seeking a new direction. An avid movie aficionado, he had become interested in the Italian neorealist works of Vittorio De Sica (The Bicycle Thief, Miracle in Milan). A collaboration, however seemingly unlikely, was soon in the works. De Sica conceived of a film set entirely in an Italian train station, with a variety of stories going on at once. The incompatibility between the two cinema legends quickly became apparent when Selznick demanded that his wife, movie star Jennifer Jones, star. De Sica's ideas for side stories faded into the background or were completely jettisoned as the story was reconstructed to focus on a Philadelphia housewife forced to leave her Italian lover behind. Montgomery Clift, hot on the heels of his Academy Award-nominated role in A Place in the Sun (1951) was chosen to co-star. Cast as Jones' adoring nephew was a young Richard Beymer in his first role. He would later play Tony in West Side Story (1961) and Mr. Horne on Twin Peaks (1988-1991). Filming was turbulent as Selznick and De Sica, both used to having final say on their pictures, battled for control. The screenplay by De Sica's usual collaborator Cesare Zavattini was rewritten by both Truman Capote and Carson McCullers at Selznick's request (Capote receives a "Dialogue by" credit, though he later told an interviewer he only worked on two scenes.) De Sica shot in his trademark neorealist style, but Selznick panicked when he realized that there were no closeups of Jones. They compromised by bringing English cinematographer (and frequent John Huston collaborator) Oswald Morris on set to do the requisite Hollywood glamor shots. Ultimately De Sica had a two hour film entitled Terminal Station, which he was allowed to release unadulterated in Italy, while Selznick was free to take the footage back to America to re-edit as he pleased. Removing the last vestiges of De Sica's subplots and adding Morris' lingering closeups of Jones and Clift, the producer emerged with Indiscretion of an American Wife, a picture that more closely resembled a big-budget Hollywood movie. Even then, Selznick ran into trouble with the Production Code Administration, who were concerned with its "improper treatment of adultery." Further edits made it, in Selznick's words, "the most moral picture ever to come out of Europe." The final American version ran only 63 minutes. Indiscretion of an American Wife would receive an Oscar nomination for Christian Dior's costume design at the 27th Annual Academy Awards.

25%off
Forbidden Cinema Presents: Vintage Smokers From the 1920s... TOP 25 Bestselling DVD
$5.95 on Sale
Add to Cart
(4)
Film Collectors & Archivists: Alpha Video is actively looking for rare and unusual pre-1943 motion pictures, in good condition, from Monogram, PRC, Tiffany, Chesterfield, and other independent studios for release on DVD. We are also interested in TV shows from the early 1950s. Share your passion for films with a large audience. Let us know what you have.
How to Order
Shipping Rates & Options
International Shipping
Return Policy
Request a FREE Catalog
Order Items by Catalog
View Catalogs Online
Safe Shopping Guarantee
Buy a Gift Certificate
About OLDIES.com
Customer Reviews
Contact Info
Privacy Policy
Send Feedback
Login
Forgot Password?
Sign Out
Email Subscriptions
Redeem Gift Certificate
To place an order or for customer service, call toll-free 1-800-336-4627 or outside the United States, call 1-610-649-7565
Open Monday-Friday: 9am-10pm, Weekends: 11am-7pm (Eastern Time)
Portions of this page © 2020 TiVo Corporation. For personal non-commercial use only. All rights reserved.
All copyrights, trademarks, and logos are owned by their respective owners. Rotten Tomatoes content and Certified Fresh™ Logo is Copyright © Fandango. All rights reserved.
© 2020 OLDIES.com and its affiliates and partner companies. All rights reserved.