Four hard-to-find mystery shows, unseen since the Golden Age of Television! Includes 'The Visitor', 'The Cases of Eddie Drake', 'The Telltale Clue', and 'The Files of Jeffrey Jones.' 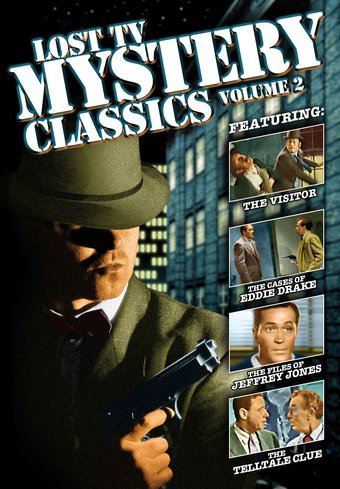 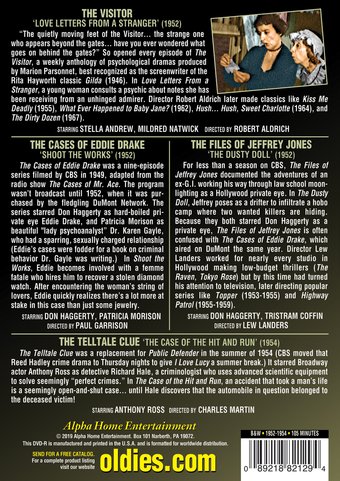 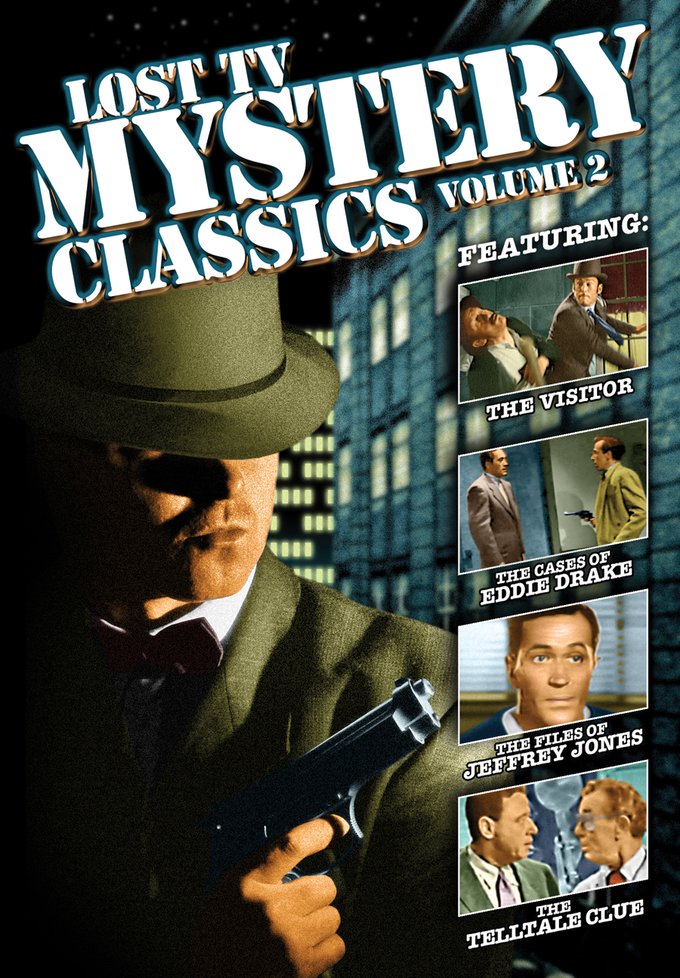 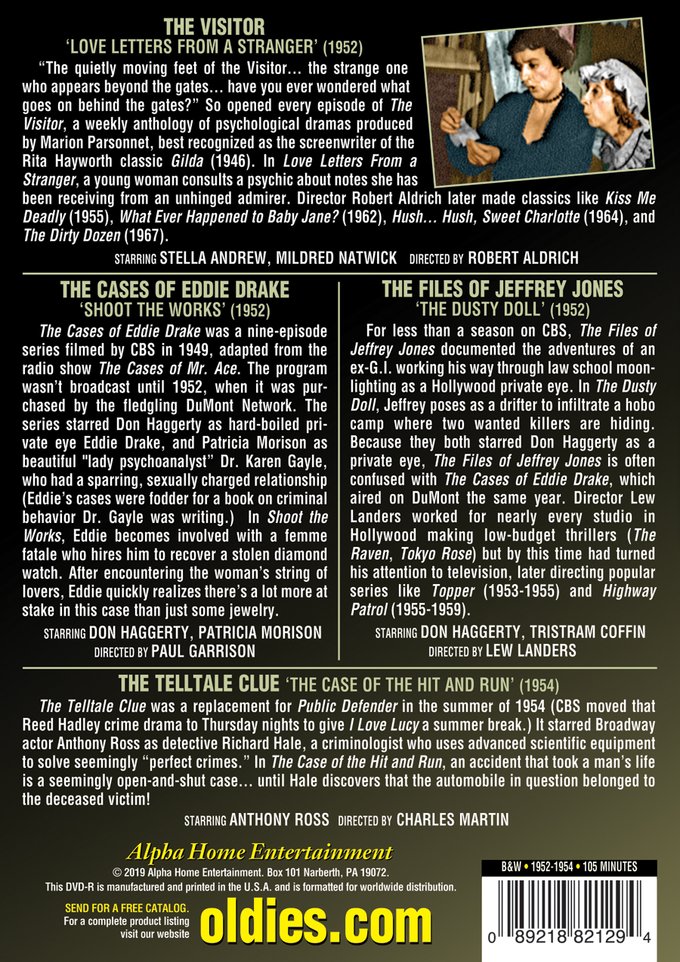 THE VISITOR 'LOVE LETTERS FROM A STRANGER' (1952): "The quietly moving feet of the Visitor...the strange one who appears beyond the gates...have you ever wondered what goes on behind the gates?" So opened every episode of The Visitor, a weekly anthology of psychological dramas produced by Marion Parsonnet, best recognized as the screenwriter of the Rita Hayworth classic Gilda (1946). In 'Love Letters From a Stranger", a young woman consults a psychic about notes she has been receiving from an unhinged admirer. Director Robert Aldrich later made classics like Kiss Me Deadly (1955), What Ever Happened to Baby Jane? (1962), Hush...Hush, Sweet Charlotte (1964) and The Dirty Dozen (1967).

THE CASES OF EDDIE DRAKE 'SHOOT THE WORKS' (1952): The Cases of Eddie Drake was a nine-episode series filmed by CBS in 1949, adapted from the radio show The Cases of Mr. Ace. The program wasn't broadcast until 1952, when it was purchased by the fledgling DuMont Network. The series starred Don Haggerty as hard-boiled private eye Eddie Drake, and Patricia Morison as beautiful "lady psychoanalyst" Dr. Karen Gayle, who had a sparring, sexually charged relationship (Eddie's cases were fodder for a book on criminal behavior Dr. Gayle was writing.) In "Shoot the Works", Eddie becomes involved with a femme fatale who hires him to recover a stolen diamond watch. After encountering the woman's string of lovers, Eddie quickly realizes there's a lot more at stake in this case than just some jewelry.

THE FILES OF JEFFREY JONES 'THE DUSTY DOLL' (1952): For less than a season on CBS, The Files of Jeffrey Jones documented the adventures of an ex-G.I. working his way through law school moonlighting as a Hollywood private eye. In 'The Dusty Doll', Jeffrey poses as a drifter to infiltrate a hobo camp where two wanted killers are hiding. Because they both starred Don Haggerty as a private eye, The Files of Jeffrey Jones is often confused with The Cases of Eddie Drake, which aired on DuMont the same year. Director Lew Landers worked for nearly every studio in Hollywood making low-budget thrillers (The Raven, Tokyo Rose) but by this time had turned his attention to television, later directing popular series like Topper (1953-1955) and Highway Patrol (1955-1959).

THE TELLTALE CLUE 'THE CASE OF THE HIT AND RUN' (1954): The Telltale Clue was a replacement for Public Defender in the summer of 1954 (CBS moved that Reed Hadley crime drama to Thursday nights to give I Love Lucy a summer break.) It starred Broadway actor Anthony Ross as detective Richard Hale, a criminologist who uses advanced scientific equipment to solve seemingly 'perfect crimes.' In 'The Case of the Hit and Run', an accident that took a man's life is a seemingly open-and-shut case...until Hale discovers that the automobile in question belonged to the deceased victim! Anthony Ross went back to Broadway when The Telltale Clue ran its course in September 1954, playing the role of Dr. Lyman in Bus Stop. After the October 26, 1955 evening performance, Hale returned home and died of a heart attack in his sleep. He was 46 years old.