Hell was an ocean away 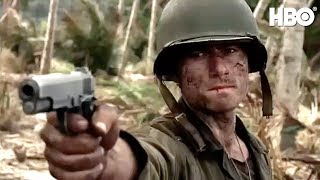 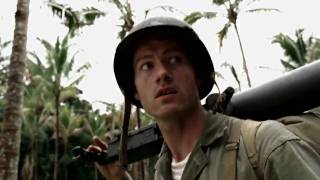 The Pacific is an epic 10-part miniseries that delivers a realistic portrait of WWII's Pacific Theatre as seen through the intertwined odysseys of three U.S. Marines - Robert Leckie, John Basilone and Eugene Sledge. The extraordinary experiences of these men and their fellow Marines take them from the first clash with the Japanese in the haunted jungles of Guadalcanal, through the impenetrable rain firests of Cape Gloucester, across the blasted coral strongholds of Peleliu, up the black sand terraces of Iwo Jima, through the killing fields of Okinawa, to the triumphant, yet uneasy, return home after V-J Day. The viewer will be immersed in combat through the intimate perspective of this diverse, relatable group of men pushed to the limit in battle both physically and psychologically against a relentless enemy unlike any encountered before.

BAND OF BROTHERS producers Tom Hanks and Steven Spielberg re-team to produce this ten-hour World War II miniseries based on the books WITH THE OLD BREED by Eugene Sledge and HELMET FOR MY PILLOW by Robert Leckie. Additional interviews conducted by the filmmakers in collaboration with Hugh Ambrose (son of late BAND OF BROTHERS author Stephen E. Ambrose) detail the arduous odysseys of U.S. Marines Sledge, Leckie, and John Basilone from their first skirmishes in Guadalcanal to their eventual return to American soil following V-J Day.

Flags of Our Fathers
$10
Add to Cart