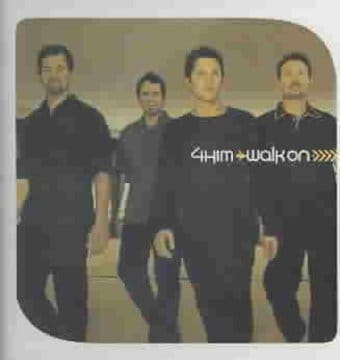 4HIM: Andy Chrisman, Kirk Sullivan, Mark Harris, Marty Magehee.
Additional personnel includes: Jerry McPherson, Phil Madeira (guitar); The Nashville String Machine (strings); Mark Heimermann (keyboards, programming); Jackie Street (bass); Scott Williamson (drums); Javier Solis (percussion).
Producers: Mark Heimermann, Brent Bourgeois.
Engineers include: JR McNealy, David Shober, Todd Wells.
4Him has been producing radio-friendly adult contemporary hits for over ten years. On Walk On, the band embraces their patented formula while also venturing onto some new ground. Covering the familiar, cuts like "Psalm 112" and "City of Refuge" hum along with the classic 4Him signature, well-written, adult contemporary fare with harmonies solid as a rock. Shifting gears, the group strolls into Sonic Flood territory on the cut "I Know You Now." Here, 4Him cuts out a straightforward groove with heavier guitars and a hooky chorus. The same could be said for "This Is My Declaration." On the song 4Him leans on a Steven Curtis Chapman musical vibe while a funky guitar riff leads the way. One of the disc's best moments comes via the bluesy "One Foot in the Water." Here the lead vocals have the feel of the Atlanta Rhythm Section while an apt horn section and Hammond B-3 provide a sturdy bedrock. Closing out the disc is the cut "Love Boomerang." With all-out Southern flair, the tune utilizes down-home gospel stylings with well-delivered acoustic guitars. Walk On is a release overflowing with virtue, well-produced songs, and pure vocal splendor. With the disc, 4 Him succeeds at carrying on their fine tradition of excellence. ~ Steven Douglas Losey

The Statler Brothers
The Best from the Farewell Concert
$12.50
Add to Cart

Troy Sneed
All Is Well
$10
Add to Cart

Reba McEntire
My Chains Are Gone
$11.90
Add to Cart