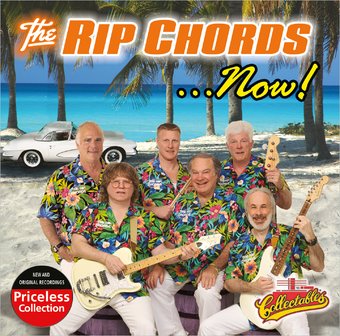 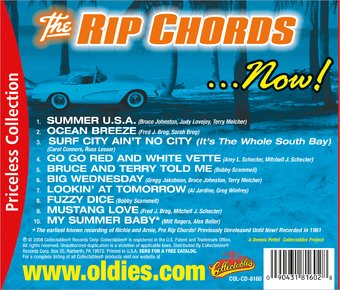 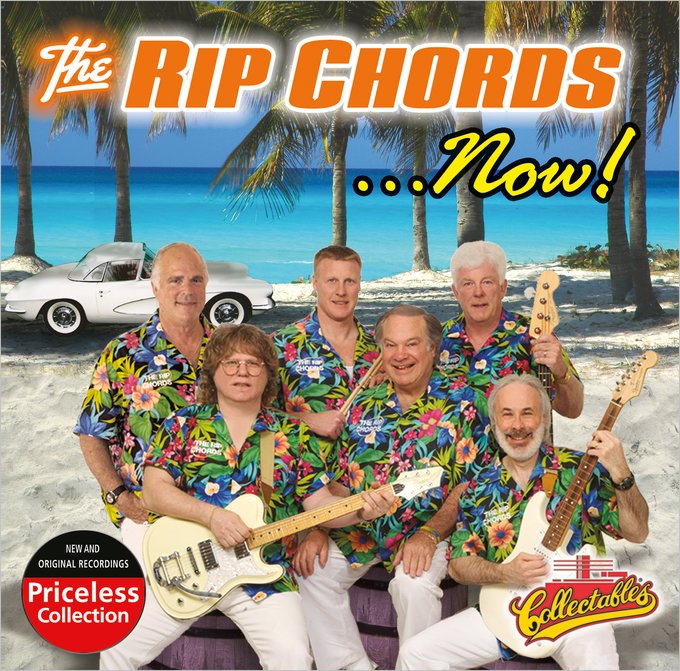 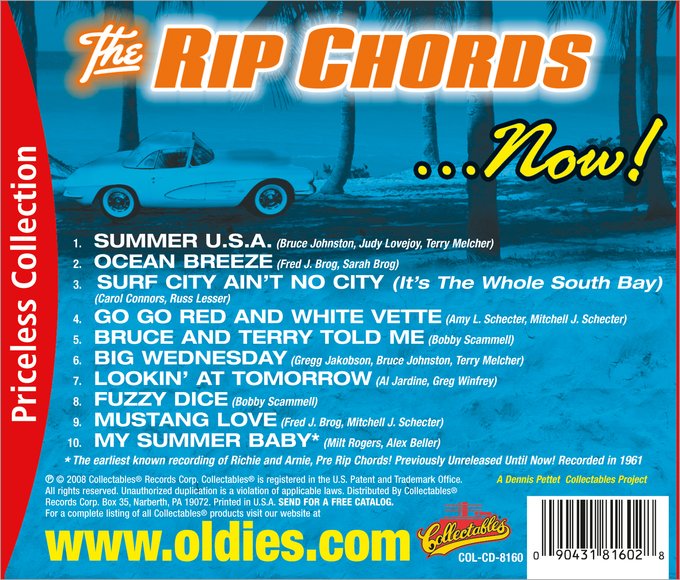 Available for the first time are ten new classics from legendary surf group, The Rip Chords.

25%off
The Surf City Allstars
Acoustic Vibrations (CD)
$5.98 on Sale
Add to Cart


The Rip Chords Now is simply FANTASTIC. Songs like "Bruce And Terry Told Me" and "Fuzzy Dice" are incredible, and the guys' version of "Summer USA" is great! This is the SURF CD everyone should have! FANTASTIC!!!!!!


I just saw The Rip Chords perform at the Ocean City Convention Center in Ocean City Maryland, and they were great. After the show,I picked up a copy of their new CD called "The Rip Chords...Now!" and after listening to it in the car on my way home, I just had to write in to Collectables Records and thank them for putting out this fine CD. I love the California sound of The Beach Boys,Jan & Dean, and others like them, and it is clear that The Rip Chords intend to continue in that same musical path,which is great. Their harmonies are spot on, and the musicianship is supurb. The songs on this CD flow together, like a smooth ocean beach day. My favorite track is "Ocean Breeze", and I remember that they did a great version of this song in concert. Another song that I can't get out of my head is "Fuzzy Dice",which I have already heard on a radio station from Wildwood,NJ.
Thank you Collectables Records for releasing this great CD.


I have been a Surf/Hot Rod Music lover my whole life and I have followed the careers of all of the important Surf/Hot Rod bands throughout the years. There have been many great albums put out by many great bands in this musical catagory,and this new CD by The Rip Chords stands up quite well with any of the classic releases. There are a ton of amazing harmonies and guitar licks here. I just wonder why The Rip Chords took so long to put out new material. Well,that new material is here now and there are some amazing songs to enjoy.And Mitch Schecter's production is crystal clear. My favorites are the car songs,obvoiously. "Fuzzy Dice" & "Go Go Red & White Vette" are hit records! At least in the 60's they would have been, and they should be today!. "Ocean Breeze" has a nice tropical feel. I agree with another reviewer that Jimmy Buffett would have a hit with this song. "Surf City Ain't No City" is a great song about the history of the surfing craze (to quote a classic Rip Chords track). And it was written by none other than Carol Connors who wrote "Hey Little Cobra" all of those years ago. The original members in attendance here are 60's touring/recording members Richie Rotkin & Arnie Marcus..looking a bit older on the cover than they did on the "Three Window Coupe" album cover, but still rockin' none the less! This CD will be the soundtrack for my summer of 2008. 5 Stars!


This new CD by "The Rip Chords" is such a fun CD to listen to. It makes you long for the beach and summer fun. Great tracks on this CD.
I love "Summer USA" and "Go Go Red & White Vette",but all of the songs are fun to listen to.
I can't wait for my first drive to the beach this summer. I'll be blasting the new Rip Chords CD from my car stereo,with the top down!


I just heard the brand new RIP CHORDS CD and I've got to tell you ... there's not a weak track on this album!!! (Now all we need to do is to get a few of the oldies jocks out there to give a spin to a couple of these tracks and get the word out there that THE RIP CHORDS are STILL recording some GREAT music.) Stand-Out tracks in MY opinion ... and worthy of some airplay ... are OCEAN BREEZE, FUZZY DICE and BRUCE AND TERRY TOLD ME. We need to let the oldies fans out there know that these guys are STILL creating great music ... and THIS CD is a real find!!! The remake of SUMMER U.S.A. sounds SO good you'll swear it was recorded 40 years ago ... and MY SUMMER BABY, a previously unreleased track recorded by RIP CHORDS founders RICHIE ROTKIN and ARNIE MARCUS back in 1961, really WAS!!! In addition you get MY personal favorite, OCEAN BREEZE. (Man, if oldies radio won't play this track, then we need to get JIMMY BUFFET to record it ... I'm telling you, THIS is a Hit Record!!!) There's even a brand new track written by CAROL CONNORS (who wrote THE RIP CHORDS' original big hit HEY LITTLE COBRA) on the new CD! I also enjoyed a VERY nice remake of BIG WEDNESDAY (featuring a GREAT surf-guitar instrumental courtesy of MITCH SCHECTER), an AL JARDINE tune (LOOKIN' AT TOMORROW) and a couple of "Feel Good" tracks written by bassist and keyboardist BOBBY SCAMMELL round out the set. (You'll LOVE FUZZY DICE ... and BRUCE AND TERRY TOLD ME is SO clever you'll want to listen to it again and again!) Bottom line: this is a THOROUGHLY enjoyable CD, start to finish ...(I've already listened to it half a dozen times myself!!!) ... proving once again that some of these artists are STILL out there making great music that simply isn't getting played on the radio. (That's why we're trying to help to spread the word!!!) I'm sure you'll really enjoy the new RIP CHORDS CD if you just give it a spin! It's a solid 4-Star Release!!!