Which Way to the Front? G

Comedy legend Jerry Lewis stars as Millionaire Brendan Byers, puncturing war's lunacy by being even loonier. He's heavily armed with his trademark physical buffoonery and dizzying pace. Which way to uncontrollable laughter? This way, of course. 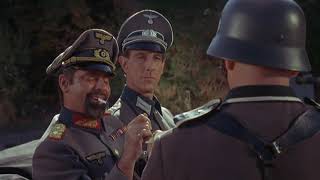 Millionaire Brendan Byers may be 4-F but feels it's "every man's right to be killed fighting for his country." So he puts his money where his mouth is. Unable to be in Uncle Sam's army, he does the next best thing: buy one. Once his men are trained on the finest golf courses, plunged into sea survival courses in posh swimming pools and taught the art of killing with Camembert cheese, Brendan leads them to war. One question remains: Which Way to the Front?

Comedy legend Jerry Lewis stars as Brendan, puncturing war's lunacy by being even loonier. He's heavily armed with his trademark physical buffoonery, dizzying pace and solid support from comedy pros like Jan Murray, Steve Franken and the incomparable Kaye Ballard. Which way to uncontrollable laughter? This way, of course.

After being rejected by the army, a moronic millionaire forms his own platoon with which to attack Hitler's forces.

Action | Personal Triumph | Theatrical Release
This product is made-on-demand by the manufacturer using DVD-R recordable media. Almost all DVD players can play DVD-Rs (except for some older models made before 2000) - please consult your owner's manual for formats compatible with your player. These DVD-Rs may not play on all computers or DVD player/recorders. To address this, the manufacturer recommends viewing this product on a DVD player that does not have recording capability.