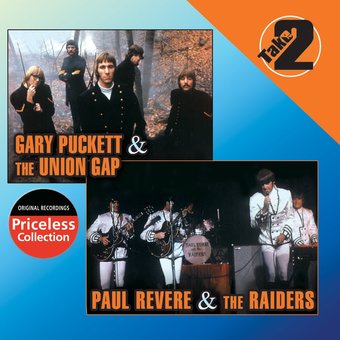 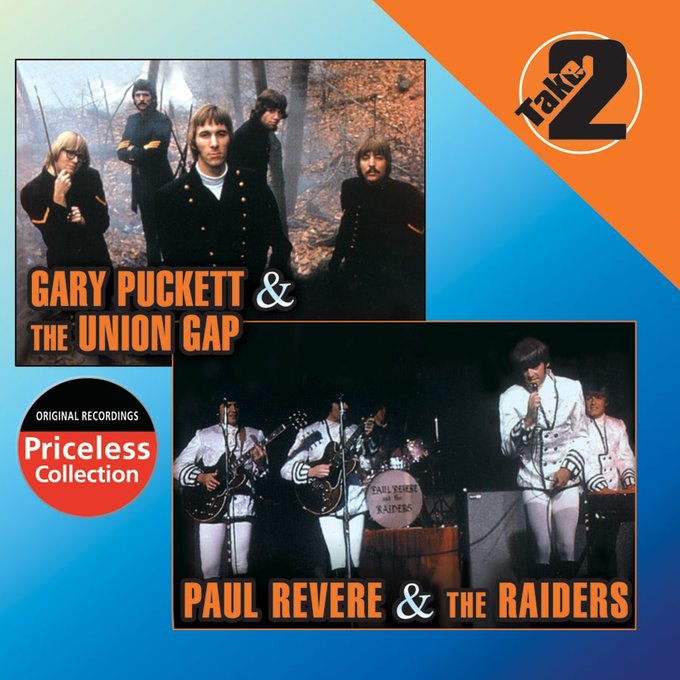 A budget-priced 10-track collection of favorites from Paul Revere & The Raiders and Gary Puckett & The Union Gap. All original recordings.

Full performer name: Paul Revere & The Raiders/Gary Puckett & The Union Gap.
Take Two features five songs apiece from '60s hitmakers Paul Revere & the Raiders and Gary Puckett & the Union Gap. Apart from their stage gear (Revolutionary War togs for Revere and Civil War for Puckett) the bands don't share much stylistically. The Raiders were a hard-as-steel rock & roll band as evidenced by their tracks here like a blazing version of "I'm Not Your Stepping Stone," a nasty take on "Baby Please Don't Go" and the hard-driving anti-drug screed "Kicks." Even their ballads ("Sometimes") were tough. Gary Puckett was more of a Vegas-styled entertainer, in thrall to the big ballad drenched in strings and horns. Not terrible in theory but Puckett didn't really have the style to pull it off. Of his group's five songs here only "Young Girl" makes any impression. It is also the only one of his hits included, while "Kicks" is the only Revere hit included. The lack of hits and brevity of the collection make it a questionable exercise, neither group is very well served by the tracks chosen here and casual fans will want to get discs that have all the hits on it. ~ Tim Sendra