Together again - and it's no fib, their funniest hit since "Adam's Rib" 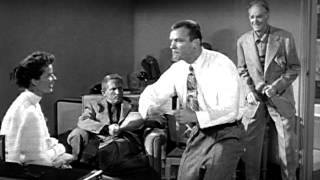 One of the most engaging George Cukor comedies, this was the director's eighth and last film with Katharine Hepburn. With exceptionally witty dialogue (the Kanin/Gordon script got an Academy Award nomination), PAT AND MIKE was tailor made for its two stars, presenting a picture of sexual politics far ahead of its time. The film tells the story of the unlikely professional and romantic relationship between a classy female golfer and a street smart sports promoter. Pat Pemberton (Katharine Hepburn) is a physical education teacher who, entering a golf tournament, is approached by Mike Conovan (Spencer Tracy), a sports promoter and manager. Impressed by her game, he convinces her to sign a pro contract to compete in various sporting competitions. Now it is Mike's task to get Pat into professional shape. Hepburn did all of her own golfing in the finished film. Appearing in the movie as themselves were some of the most celebrated sportswomen of the era, including golfer Babe Didriksen Zaharias and tennis star "Gorgeous" Gussie Moran.

A classy female golfer (Katharine Hepburn) and a street smart sports promoter (Spencer Tracy) join forces with comic mishaps aplenty in this George Cukor picture. The pair find themselves battling mobsters, a jealous boxer, and a growing mutual attraction, as they try to get her into competitive shape.