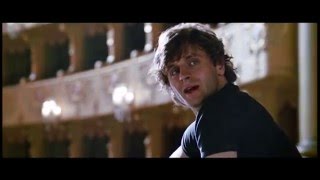 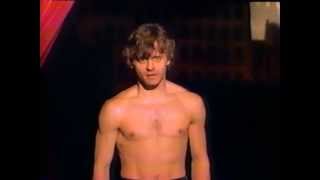 When Nikolai "Kolya" Rodchenko's plane makes an emergency landing in the Soviet Union, the world-famous dancer, played by Mikhail Baryshnikov, has reason to feel terrified: now that the defector is back on Russian soil, the authorities may refuse to let him leave again. But the KGB actually has a subtler and more clever plan: they want Kolya to return of his own free will. They send him to Siberia to meet with another famous defector, Raymond Greenwood (Gregory Hines), a talented African-American tap dancer, who has requested Russian citizenship because he'd become fed up with racism at home.

Despite their clashing ideologies, the two men find that their love of dance overcomes political differences. But Kolya is determined to go back to the United States, and Raymond is just as determined not to leave his wife, a Soviet citizen. In a strange role reversal, the two must find common ground for either to get what they want. Baryshnikov's graceful, gravity-defying balletic dancing and Hines's loose-limbed, seemingly effortless tap dancing are among the film's best moments.

Eight years after he famously defected from Russia, world-renowned dancer Nikolai Rodchenko finds himself back on Russian soil against his will when his plane is forced to make an emergency landing at a Soviet military base. The Soviets quickly learn his identity and decide to hold him as a criminal. But concern for the Soviet image worldwide has them wanting to convert Rodchenko, not punish him, so he is matched up with another dancer--an American defector--to encourage his loyalty. Mikhail Baryshnikov and Gregory Hines each bring their own brand of dance to the film, with Twyla Tharp's choreography. The soundtrack features Lionel Richie's "Say You Say Me," and Phil Collins and Marilyn Martin singing "Separate Lives."