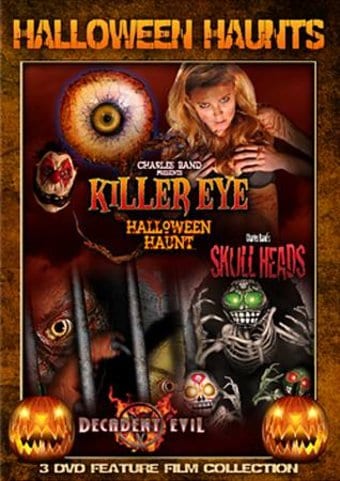 You're in for a treat with this 3-DVD set presented by Full Moon Features.

KILLER EYE: HALLOWEEN HAUNT: When Jenna asks her four hot girlfriends to help convert an old mansion into a Halloween Haunt, they decide to party instead! Things get steamy between the girls, until they accidentally unleash the half-pint, horrible Killer Eye, a perverse party crasher from beyond. Bent on having his way, the Killer Eye will stop at nothing until he gets exactly what he wants.

DECADENT EVIL: A power hungry vampiress imprisons her half-human, half-reptile lover. As part of her sinister plan to rule the creatures of the night, she must taste first blood of 10,00 victims. A vampire stripper and her boyfriend are the only things in her way.

SKULL HEADS: The mysterious Arkoff family live in a castle secluded from the outside world, but their beautiful daughter Naomi desperately wants to connect with the outside world. When Naomi invites three outsiders into the castle, they turn out to be deadly art thieves. The thieves are soon given a taste of there own medicine by the castles protectors. These protectors are empowered by ancient Italian witchcraft and elemental magic. Some know them as Skull Heads!