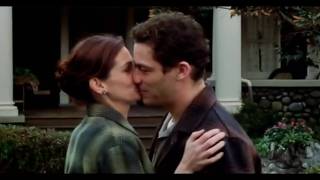 Mike Newell's MONA LISA SMILE is a pretty period film that combines a quaint pedagogical tale with a feminist dissection of traditional female roles in 1950s society. Julia Roberts leads an impressive cast of top young actresses including Maggie Gyllenhaal, Kirsten Dunst, and Julia Stiles. Roberts is Katherine Watson, a revolutionary art history teacher at Wellesley College in 1953. Though she has true admiration for her intelligent all-female students, she is perturbed that their interest in finding husbands takes precedence over their studies. Determined to instruct them in feminist values and teach them to be independent--defying the college's emphasis on breeding good wives, mothers, and homemakers--Watson is deemed subversive by the administration. Even Watson's identity--from California, over 30 years old, and unmarried--is problematic. And when she turns her class onto modern art rather than teaching the recommended classical curriculum, Watson is severely chastised by the staunchly conservative students and faculty.

Beautiful photography of the picture-perfect Wellesley campus combined with a perpetual parade of lovely period costumes makes MONA LISA SMILE a visual delight. Strong performances by each of the actresses, including Dunst uncharacteristically cast as a prim and proper prude, and Marcia Gay Harden as a boring tv-addicted spinster, only add to the splendor of this enjoyable film.