Lightning in a Bottle: A One Night History of the Blues PG-13
by Various Artists 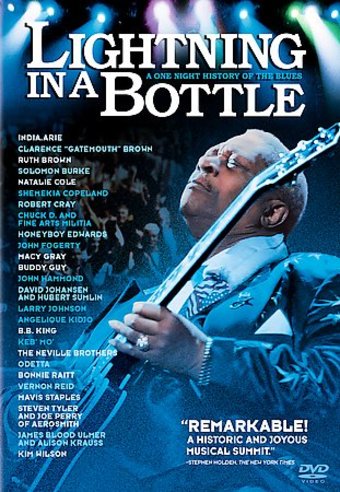 A slice of musical history was created on February 7th, 2003, when a dazzling array of blues artists gathered at New York City's Radio City Music Hall. With luminaries such as B.B. King, Solomon Burke, Ruth Brown, Mavis Staples, Buddy Guy, and Dr. John among the lineup, this was always destined to be a night to remember. But the organizers were savvy enough to up the ante even further by integrating a comprehensive--albeit by their own admission, incomplete--history of the genre into the evening's festivities. Director Antoine Fuqua (KING ARTHUR) was there with a full crew to record the event, capturing moments of magic both on stage and behind the scenes for LIGHTNING IN A BOTTLE. Fuqua also splices in some of the archival footage that the organizers showed on the night, including many of the Radio City artists performing and speaking at a much younger age. The influence of the blues over popular music is vast, and so performers such as Aerosmith, Chuck D from Public Enemy, and David Johansen are brought on stage to vie with their counterparts from a more traditional strain of the genre. Poignant moments come thick and fast, with many of the musicians reminiscing about the old times, and realizing that this would probably be the last occasion on which they were all gathered in the same room. An inspiring historical document, Fuqua's film captures a dying breed of artists, but also points to their lasting legacy and influence which will indefinitely loom large over the music scene.